The Super League club are the first in professional rugby league to launch a range of non-fungible tokens; “It’s really important we entered this digital space because these are the platforms younger supporters and audiences are engaged in,” chief executive Karl Fitzpatrick says

There is a certain generation of rugby league fans who will remember the Merlin trading card collection of the early 1990s which immortalised some of the sport’s stars of the day.

Going back further in the mists of time, the Ogden’s cigarette company included cards with hand-drawn caricatures of some of what was then known as the Northern Union’s leading players in packets, too, but now one Super League club is taking the concept into the 21st century.

Strictly limited to seven and each coming with a personalised video message and physical framed Wolves shirt signed by the England international, this marks a move into a digital space which Warrington chief executive Karl Fitzpatrick believes is vital to both the club and sport engaging a younger audience.

“I think number of supporters are still trying to get their head around it, but we’ve had quite a lot of positive feedback in terms of the club being at the forefront of new media and new platforms,” Fitzpatrick told Sky Sports.

“It demonstrates we are willing to push the boundaries and innovate, and being progressive is one of our core values.

“One of our core values is to be progressive and therefore I think it’s really important we entered this digital space because these are the platforms younger supporters and audiences are engaged in. 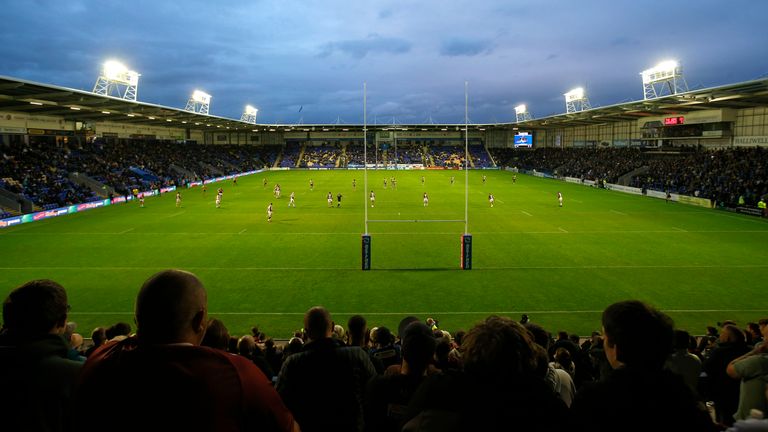 I think it’s really important we entered this digital space because these are the platforms younger supporters and audiences are engaged in.

“It’s important we as a club are on these platforms and speaking a language young people understand.”

Two different factors alerted Fitzpatrick to the potential of NFTs. The first was reading an article earlier this year on how the National Basketball Association in the USA have embraced them, and the second came from a meeting with Matchroom Sport supremo Barry Hearn where the first question the former Salford full-back was asked was ‘what is the Wolves’ NFT strategy?’

At the same time, Williams had started to do his own research into the potential of blockchain technology following a conversation with a friend with an interest in NFTs and cryptocurrency – and had come to believe it was something both he and the club should be involved with.

“I’ve been reading and watching videos and trying to get knowledge on it, and I spoke to Karl Fitzpatrick a month ago about it all and he mentioned it to me,” Williams told Sky Sports.

“Since then, we’ve had a few ideas and he’s come up with the plan to roll with it. It’s pretty new to me, but I’m pleased it’s gone ahead, and we’re the first club and I’m the first player in the sport.

NFTs have not been without controversy, particularly given the concerns around the environmental impact of the energy-intensive process of regulating and verifying blockchain transactions.

Fitzpatrick insists this venture is not at odds with Warrington’s sustainability aims though, citing the decision to issue a small, limited number of NFTs. It’s pretty new to me, but I’m pleased it’s gone ahead, and we’re the first club and I’m the first player in the sport.

“We’re aware of that and one of our strategies is to become a sustainable organisation,” Fitzpatrick said. “That’s very important to us and that’s one of the reasons we’ve only done seven editions.

“The issues with NFTs and carbon emissions are the companies doing tens of thousands of these, therefore we were quite strategic with this.

“There’s the scarcity value of the seven, but there’s no impact on the environment with the small number we’re going to release.”

The NFT launch follows the Wolves’ bold new advertising campaign around their new home and change kits for the 2022 Super League season which have also been unveiled in recent weeks.

Indeed, Warrington’s next venture could see them selling replica merchandise in the Metaverse and Fitzpatrick is eager to keep pushing the club and rugby league to untapped online audiences.

“Metaverse is another opportunity we’re currently looking into,” Fitzpatrick said. “Are there any opportunities in the Metaverse where we can sell Warrington Wolves merchandise, for example?

“I was reading recently Nike are looking to enter this space with CryptoKicks so when kids are playing in the Metaverse they can buy some Nike trainers – so, why can’t they buy a Warrington Wolves shirt as well?