We Spoke With Nathan Florence About NFTs, Cryptocurrency and The Impact on Board Sports – TheInertia.com 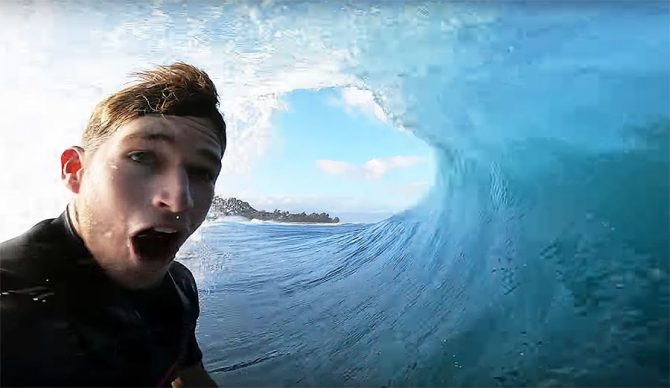 Nathan Florence taking his subscribers on a ride. Image: Screenshot/YouTube

Monkeys, basketball draft announcements, ex-Twitter CEO Jack Dorsey’s first Tweet — these items and everything in between are examples of non-fungible tokens, or NFTs, being bought and sold at this very second around the world. The diversity and weirdness of these things have become emblematic of NFTs and cryptocurrency as a whole, where if you don’t embrace it early, you’re bound to fall behind.

This mantra is no different for the emergence of NFTs into the sports world. The fusion arguably began with the Vancouver-based company Dapper launching the NBA Top Shot marketplace in October 2020. The e-commerce site allows anyone to buy a moment from basketball history featuring any team, player, and game. The top sale from this site is crowned by an NFT of none other than LeBron James, dunking on a Miami Heat defender in the 2020 NBA Finals.

Dapper has managed to transform this site into a multibillion-dollar business, and although the price spike of sports NFTs has died down since, the company, along with other parties, is moving into other professional sports, such as football, soccer, and even rugby.

The implication is clear for both athletes and content creators. With consulting firm Deloitte projecting sales of sports NFTs to double in 2022, the question now is not if, but when will surfing, snowboarding and other board sports be pulled  completely into the fold?

As if you needed another person getting in your face telling you what an NFT is, here’s a quick review: it’s a digital asset that, picture this, instead of a photo on the wall or a signed jersey in a drawer, someone could claim ownership of a clip of Andy Irons in Momentum: Under the Influence. Or the WSL could sell a video of Kelly Slater’s perfect heat at the 2016 Billabong Pro Tahiti, or Jordy Smith’s rodeo flip might be auctioned off to the highest bidder. An NFT is proof that you have the original of a certain piece of… well, anything. Take, for example, Van Gogh’s original Starry Night. It’s worth more than a poster of the same painting, right? But only if you know for sure that it’s the original. An NFT is simply proof that you do indeed own an original of whatever you purchased. Which is extraordinarily important in a world where digital art is so easy to copy.

Yes, we know you can pull any and all of these clips up on YouTube for free, which is best for the environment anyway. Some economists estimate that each time an NFT is minted and sold, it’s likely to have a carbon footprint more than 14 times that of mailing a traditional art print. But that won’t prevent this kind of collecting from becoming a reality. An important consideration, regardless, is who will ultimately reap the benefits of this emerging economy — some guy that can buy out the Surf Ranch but has never even stood up on a board, or the athletes themselves?

To get some input, I spoke with Nathan Florence, big-wave chaser, Crossfit evangelist, and vlogging stand out from Haleiwa. Nathan’s recently been involved in Surf Punks, a collection of about 500 unique characters belonging to the “Crypto Surf League” that can be mined on the ethereum blockchain and used to join an exclusive community of buyers. But his intro to investing and cryptocurrency began much earlier.

“I was always super interested in investing,” he says. “I didn’t know how to even begin to start, and then that was right around when apps like Robin Hood started to come about, which made it a lot easier for people just to sign up and start investing. So I did a lot of research. I ordered a lot of books and read a lot, jumped into stocks and started a group with a couple of my friends and we kind of said, ‘Okay, let’s all put a small amount of money in something that we’re willing to risk losing and let’s go a year and see who wins on a percentage gain in the year.’ We realized we had a little bit of a talent for it. So it continued from there and then I got into cryptocurrency through some friends who had been in it for years. It was just a learning process. I knew nothing about NFTs. I knew nothing about different utilities. All I knew was, ‘Hey, this looks like a fun investment, a fun way to make money.”

Florence quickly realized the possibilities for NFTs with input from his friend group and his filmer, Zoard Janko. Beyond NFTs’ value in collecting for owners or royalties for creators, the utility side of the asset is what got Nathan involved with Surf Punks.

“They have a few surfers on their roster that were helping push it, but basically, to me, it’s like this is pass and they’re going to wave pools around the world,” he says. “If you have this pass, then you have access to select days at these wave pools, which I was like, ‘That’s so sick.’ Who doesn’t want this sick little secret pass that you can go and have an event with pro surfers or whoever at this wave pool and surf with everyone you know?”

Florence likened this kind of use for NFTs to an Ikon Pass, where you get access to different ski and snowboarding destinations around the world on designated dates that aren’t available to the general public. A little extra money for a little more access, but with surfing.

The access is also democratizing, Florence argues. With crypto and NFTs open to the regular Joe Blow, anyone could potentially find value in this kind of offer.

“It’s not necessarily for pro surfers,” he says. “It’s for more common surfers who are psyched to go to these wave pools and be in a group or an event and see the pros that they look up to or maybe learn from them, surf with them, you know, spend the day with him at the wave pools. That’s kind of their vibe right now. So it’s definitely made for the average surfer to get access to professional surfers, their knowledge, and access to wave pools.”

So far, this utility category of NFTs designates those assets which delineate membership, community, or access. As far as the collector side goes, such as owning a surf clip and beyond, Nathan sees more questions than concrete answers.

“As far as selling a clip as an NFT, I don’t know where that’s headed,” he says. “I would like to see more of it. But content is a war right now, you know. Everything’s content-based and everyone wants complete ownership over their own content. So it’s very hard to give up ownership of it and once you do, like, where would the value go? I don’t know.”

Nathan has tried to carve his own path when it comes to surfing content. Since starting on YouTube in 2013, he’s collected over 23-million views, many of which go to the dozens of raw GoPro POV videos that take his subscribers inside barrels at Backdoor, stomping elevator drops at Waimea, or dodging chandeliers at Jaws.

Florence sees this kind of content as a return to YouTube’s roots when other platforms, especially Instagram, have created a race to see who can post a clip the fastest.

“If you’re an individual surfer then you have the advantage of giving insight into your own personality and things that, say, those mainstream [outlets] can’t really get access to anymore,” he says. “They can just post away from the session or go live on the channel. But the individual surfers running their individual blogs are just giving it a more raw, genuine feel. I think that’s the future of content, and I think it’s what the majority of people enjoy watching now. We see so much content when there’s an act going on or someone’s portraying something that’s not necessarily themselves, or it’s kind of like, not genuine. They don’t want to see that. They want to see natural, good information, or good, raw content being portrayed and no fluff.”

Might one of Nathan’s GoPro clips — or perhaps his ride of a lifetime at Teahupo’o — end up in someone’s NFT catalog one day? Maybe. In the meantime, the continued push of cryptocurrency into all sectors of society warrants larger conversations on its viability with regard to professional surfing and board sports in general, and its compatibility with these pursuits in light of its environmental damage, and the ever-shifting content demands of an audience with a magnitude we’ve never seen before.

Only the best. We promise.

Join our community of contributors.