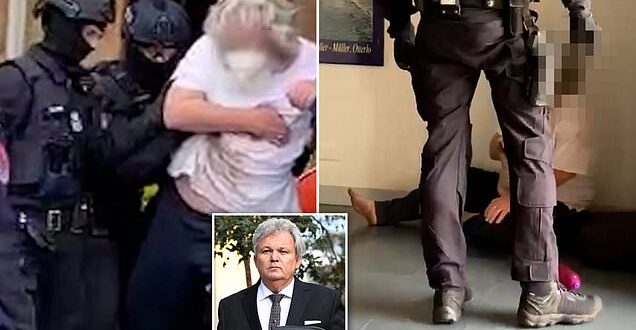 Australian Federal Police officers smashed down the door of the 58-year-old’s home near the Victorian town of Gisborne in the Macedon Ranges, to find him barefoot and wearing track pants and a cheap white t-shirt.

The heavily-armed Fugitive Apprehension Strike Team placed Foster under arrest before dragging him away.

Images of the dramatic raid show him quivering on the floor as officers descend on the rural premises.

Foster failed to appear in a Sydney court on fraud-related charges in May and an electronic tracker stopped sending a signal.

His lawyer at the time admitted he had no idea where his client was.

The case against Foster involves allegations he conned $1.7 million in Bitcoin out of a retired pilot in Hong Kong as part of a sport betting scam.

AFP Assistant Commissioner Nigel Ryan said the the arrest serves as a warning to the most dangerous and wanted fugitives hiding out in Australia.

‘The AFP’s world-leading technical and forensic capabilities is again demonstrating to offenders that there is nowhere to hide,’ he said.

‘There is no safe haven for criminals in Australia. The AFP, with our partner agencies, are relentless in ensuring those wanted for crimes face justice.

‘The arrest by FAST continues to demonstrate the close relationships the AFP has with state and territory police in combating transnational, serious and organised crime.’

Peter Foster, a notorious conman, has been arrested six months after he allegedly skipped court while facing fraud-related charges (pictured during his arrest in August last year)

Foster – using the alias Bill Dawson – allegedly promised a series of investors including pilot Konstantinos ‘Dino’ Stylianopoulosas ‘guaranteed returns’ on their money by having a mathematician predict the outcome of sports matches.

Prosecutors say Stylianopoulosas transferred Foster $2 million in cryptocurrency over the course of nine months between 2019 and 2020, in amounts ranging from $126,000 to $890,000.

But investors say their money ‘evaporated’ after they invested in the firm, called Sports Predictions, and prosecutors allege that no bets were ever placed and the money was instead diverted to Foster.

Police were tipped off about the alleged con after Stylianopoulosas contacted a team of investigators at IFW Global, who then worked with officers to track Foster down.

He was eventually tracked down to far north Queensland where he was dramatically arrested in August last year.

Foster outside court on April 22. The case against him involves allegations he conned $1.7million in Bitcoin out of a retired pilot in Hong Kong as part of a sports betting scam

Footage of the arrest, taken by IFW Global, showed two officers dressed as joggers running towards Foster on the beach before tackling him to the ground.

The case was sent to NSW, because that is where the cryptocurrency exchange used for the transactions was based.

Foster was released on bail at that hearing but effectively put under house arrest and fitted with an electronic tag to return to court.

That hearing took place on May 20, with Foster’s lawyer Justin Lewis telling the court the pair met in his office in Sydney that day at 11.30am.

Mr Lewis said Foster assured him that he would turn up, but by 2pm he was nowhere to be seen and couldn’t be contacted because his bail conditions prohibit him from carrying a phone.

The Australian Federal Police said Foster, 59, was arrested near the Victorian town of Gisborne in the state’s Macedon Ranges after a six month search

Foster rose to infamy in 2002 when he sparked ‘Cheriegate’ after it emerged he had helped then-UK Prime Minister Tony Blair’s wife buy two discounted houses.

Cherie initially denied Foster – already an established fraudster who had served jail time in the UK – was involved in the deal, but after the Daily Mail exposed emails between the pair she was forced to make an apology.

This year does not mark the first time Foster has vanished while in trouble with the law.

During the 1980s, while marketing a brand of tea that he claimed was an ‘ancient Chinese weight loss secret’, he hopped from Australia, to the UK and then to the US – setting up a string of companies to market the tea.

Foster pictured outside court in September 2019. He was dramatically arrested in August last year after being tracked down to a beach in far north Queensland

Foster outside a Gold Coast court in 2012. He was arrested for the first time at the age of 20 for a fake £40,000 insurance claim over a cancelled boxing match

In fact, the tea was ordinary black tea, but each time a firm was placed under investigation, Foster moved country and set up again. He was eventually jailed over the scam in the US.

Returning to Britain in the 1990s, he was jailed again – this time for plugging ‘thigh reduction cream’ – but absconded while on day release and went back to Australia.

He was arrested on a British warrant in Australia, absconded again, and was then re-arrested and spent more time in jail in both countries.

After spending some time in Fiji in 2001, he returned to Britain in 2002 where he began dating Carole Caplin, who was then Cherie Blair’s style guru.

It was through Carole that Foster was introduced to Cherie, and helped the Prime Minister’s wife purchase two properties in Bristol at discounted rates.

When the deal was exposed, Cherie initially denied Foster was involved, until the Daily Mail printed email conversations between the pair.

In them, Cherie called Foster ‘a star’ and told him ‘we’re on the same wavelength.’

The revelation prompted a tearful public apology from Cherie, who denied knowing about Foster’s criminal past and blamed her ‘mistake’ on ‘trying to be a good wife and mother, trying to be the prime ministerial consort at home and abroad..’

‘Some of the balls get dropped – there just aren’t enough hours in the day,’ she said.

THE LIFE AND TIMES OF PETER FOSTER

As a teenager in the late 1970s, Foster began promoting nightclubs and boxing matches on the Gold Coast. But he was declared bankrupt in the early 80s after trying to sell tickets for a Muhammad Ali fight in Australia that never came off. He was also fined $A100,000 in Britain for trying to claim insurance for a cancelled fight.

Undeterred, Foster hooked up with a number of high-profile British girlfriends who he used to promote his ‘slimming’ Bai Lin Tea. He fled Britain and fraudulently re-marketed the product as Chow Low Tea in the US where he was caught and forced to serve four months in jail. He was also jailed in the UK when he returned in 1995.

Foster sparked two weeks of turmoil for British Prime Minister Tony Blair in 2002 when he became a financial adviser to Blair’s wife Cherie. He and girlfriend Carole Caplin, a confidante to Mrs Blair, helped as ‘middle men’ in the purchase of two flats in Bristol.

Chased by local police in 2006 for forging documents about his criminal history, Foster strips down to his underpants and dives from a bridge into a river but hits his head on a boat and is captured.

He then goes on a hunger strike, preventing hospital staff from handing him over to police because he’s too weak. While on bail, escapes to Vanuatu on a boat.

Foster is declared bankrupt by the Federal Court in January 2018 after refusing to pay court costs relating to SensaSlim, a scam weight loss company.

He was jailed in 2014 for contempt of court over SensaSlim, before which he had spent around a year in hiding in a bush property near Byron Bay.

Foster arrives six hours late to his sentencing at a Sydney court in October 2018 after being sentenced for possessing a fake Irish passport in order to get an offshore betting license for a sports trading company.

His lawyer told the court his client’s delay was down to food poisoning.