Bitcoin in Spanish speaking is a weekly newsletter from CriptoNoticias in which we review the most important news related to bitcoin, cryptocurrencies and blockchains in the Hispanic world.

First bulletin of the Hispanic world of this year 2022. And as it has become customary, part of the report stars the first country in the world that approved the use of bitcoin (BTC) as legal tender: El Salvador, with the laws that they will govern the operation of your bitcoin bonds.

Also during this first full week of the year, there was news in Uruguay, with its first cryptocurrency ATM installed in Punta del Este; along with the introduction of a bill to regulate activities with cryptocurrencies before the Congress of Peru.

To know the main news from the Hispanic world, related to bitcoin, cryptocurrencies and blockchains, we invite you to read the full report that CriptoNoticias brings this week:

The year started on the wrong foot in Argentina: the country is going through an energy crisis and what the local government has done is to point its weapons against Bitcoin mining, which they accuse as the cause of recent power outages.

Meanwhile, the provinces of La Pampa and Entre Ríos joined Córdoba and Tucumán And now there are four Argentine regions that charge taxes on activities with bitcoin and other cryptocurrencies.

Neither the attacks on mining nor the new taxes seem to make a dent in the adoption of bitcoin in the South American country, where in recent days a couple of options have been added to buy properties with the cryptocurrency and a new alternative for paying tips has emerged. online using the Lightning network.

The downside to adoption is that it attracts potentially fraudulent schemes. And in Argentina there is a very striking case: the supposed gold backing of the zoe cash coin, which generates a lot of suspicion among bitcoiners and the general public.

Chile begins the year with a negative economic outlook, after the local currency, the peso, will hit its lowest levels against the dollar. Although there is no direct correlation, it has long been speculated that the stability of the peso has influenced the lack of mass adoption of bitcoin, something that could change if Chileans begin to seek refuge for their capital. 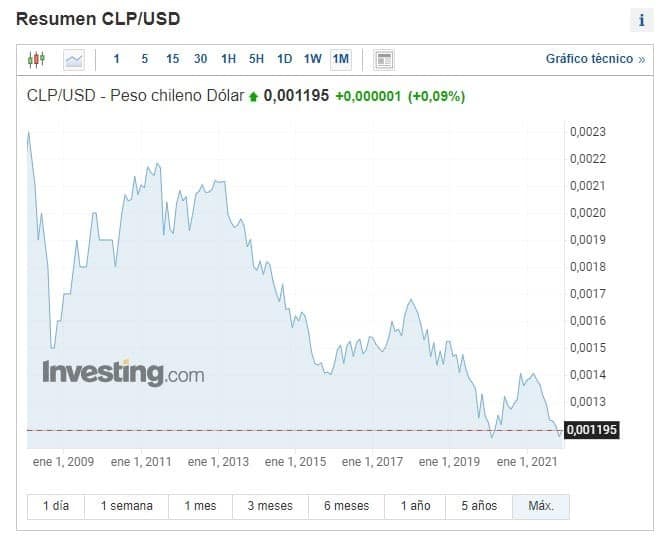 The Chilean peso has been in free fall against the dollar. Source: Investing.

Speaking of adoption, let’s go to Colombia, where a renowned aromatherapy store has decided to ride the wave of bitcoin payments. This week, Olfabrand announced that it would start accepting payments with this and other cryptocurrenciesthrough the CoinPayments gateway.

In Costa Rica, bitcoin and the world of cryptocurrencies are also beginning to gain ground. Radio CRC 89.1 will have a new one-hour weekly slot dedicated to current affairs in this world, called “Crypto-Economy.”

El Salvador does not stop generating news for the bitcoiner world. And this beginning of 2022 is no exception, after it was announced that the Congress of that country would receive up to twenty bills focused on bitcoin bonds with which they will finance the construction of Bitcoin City.

The date on which these proposals will be discussed is unknown, but it has been announced that the bonds will be launched next month. Among the criticisms of Bitcoin City, an entirely bitcoiner city in a volcanic area in southeastern Salvadoran, it was recently Steve Hanke who spoke out, claiming that with a dormant volcano the necessary energy cannot be produced. To this, President Nayib Bukele responded: “Most of the geothermal energy is extracted from wells near INACTIVE VOLCANOES! Why would you build a city under an ACTIVE VOLCANO? ”.

Meanwhile, El Salvador has become a very attractive destination, with bitcoin personalities like Max Keizer and Stacy Herbert opting for citizenship in the Central American country. Additionally, according to Renata Rodrigues, Paxful’s Marketing Director, the adoption of bitcoin would attract not only foreigners but also Salvadorans who migrated.

In Spain, on the one hand, local exchanges are affected by the current Anti-Fraud Law and its obligations, while foreigners operating in the country are exempt because they are not covered by said legal framework.

At the same time, the mining industry could see a boom in the European country while the situation worsens for miners in countries like Kazakhstan. At least, this is how deputy María Muñoz has evaluated it, in statements collected this week in CriptoNoticias.

We return to the American continent for a brief review of the current situation in Mexico, where the leader of an alleged ponzi scheme that has been investigated since last year was arrested. Jonathan Yemelian Sifuentes, manager of Xifra in Mexico, was arrested along with his bodyguard. However, the arrest was not linked to activities of the alleged fraudulent scheme but to alleged threats and attempted bribery of police officers.

The detainees were released after no evidence was found to link them to the alleged crimes.despite the fact that they were caught with long weapons and large amounts of cash.

Peru, like other Latin American countries in recent times, begins to advance in a potential regulation for cryptocurrencies. And this week a bill was formally presented to Congress that would provide a legal framework for these digital assets on Peruvian soil.

Few are the news that usually emerge from the Dominican Republic in relation to the bitcoiner world. But a Dominican developer starred in one of the novelties of the week: a 1 BTC scholarshipabout $ 41,000 at the time of writing, according to the CryptoNews calculator.

Jarol Rodríguez was awarded a scholarship by the Human Rights Foundation, as part of an initiative in which the organization will distribute 4.25 BTC among 10 developers. The Dominican, who has actively worked to improve Bitcoin Core, was the recipient of the largest fraction of that fund.

What had already been advanced at the end of 2021 became a reality at the beginning of this 2022: Uruguay has its first bitcoin and cryptocurrency ATM. The team is located in Punta del Este, a favorite tourist area among celebrities and millionaires.

Events of the week

Among the events related to bitcoin, cryptocurrencies and blockchains in the region for this week, the following stand out in the CriptoNoticias calendar:

Do you know or do you have a small business that accepts bitcoin and other cryptocurrencies for its products and services?

We invite you to share the information with us through editor@criptonoticias.com. We will report on the adoption of cryptocurrencies of that business in any of the Spanish-speaking countries.