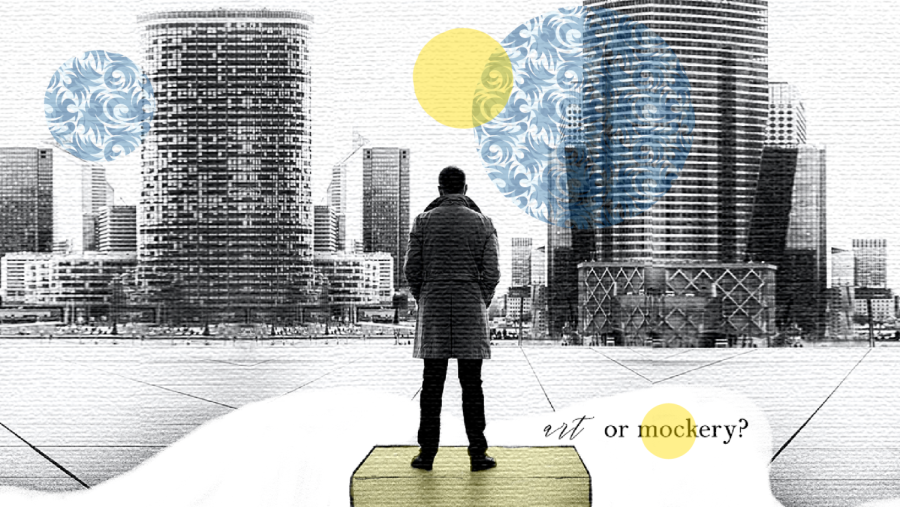 On Wednesday, Feb. 2, a $11.7 million, 410-pound, 24-carat gold cube sat guarded within New York City’s Central Park. The installation, titled “The Castello Cube” by Niclas Castello, made headlines because of its security detail and excessive extravagance. Despite its promotion as neo-expressionist street art, the cube was primarily meant to garner attention for Castello’s new cryptocurrency, the Castello Coin. Naming both the cube and the currency after himself may seem over-the-top, but not unusual for wealthy egomaniacs. Beyond that, though, the cube was an unnecessary, cringe-worthy waste. It made a mockery of art while playing into larger themes of resource wastefulness, rich privilege and meaningless social structures.

A Mockery of Art

Conceptual art can demonstrate many important truths about the world — like the “Fearless Girl” statue in New York’s financial district that encourages female empowerment. Installed around International Women’s Day in 2017, the sculpture continues to inspire women. Art like this makes impactful statements. But the gold cube makes no important impact. The artist stated that his intention with the piece was to “create something that is beyond our world — that is intangible.” Frankly, I fail to see how a gold cube depicts a deeper idea beyond our world.

In 2021, an artist named Salvatore Garau sold a sculpture for over $18,000. The twist? The sculpture was invisible. At the time, Garau justified the exchange by referring to the Heisenberg uncertainty principle — a theory in quantum mechanics that defines why we cannot measure multiple quantum variables simultaneously. With this, he argued that “you don’t see it but it exists; it is made of air and spirit.” Garau used this fancy malarkey to feign “art,” which is already a fluid term. Still, people literally bought into his nonsense. The Castello Cube is no different. It merely represents how much leeway the uber-wealthy have. Except, in this case, Castello wasted valuable resources in the process.

Castello could have used the gold to create a more meaningful piece of art. Even then, nothing can justify his absurd wastefulness. Who needs to mine and melt that much precious metal to make a point, let alone for a tone-deaf marketing stunt? Like one Twitter observer satirically commented, “I think we can all agree that what the world needs now is an $11 million medium-sized cube that has something to do with cryptocurrency.” Perhaps instead of wasting more materials, rich people should focus on what the world actually needs — like security, climate reparations, social change or addressing countless human rights violations.

A Mockery of Social Injustice

Claiming a structure as art doesn’t excuse the allocation of resources toward wasteful uses. During an era characterized by environmental degradation, one rich man could demand the mining, processing, melting and transportation of $11.7 million worth of gold — just to create a cube. The metal required casting in a special kiln to accommodate the 1,100 degrees Celsius worth of energy it needed to melt. Gold mining, by itself, creates large amounts of toxic waste, acid mine drainage, mercury pollution and has water contamination implications. And yet, all of these impacts are excused in the name of money. After its stint in Central Park, the cube even attended a “private dinner with celebrities.”

The cube’s very creation made a mockery of social inequality. As of December 2021 in New York City, where it was placed, 48,691 people experience homelessness. On Feb. 2, people in this situation had to walk by maybe the most valuable object they would ever see in their lives. Again, all while they have no access to basic necessities like shelter. One critic noted that in Central Park, “homeless people regularly freeze to death.” Protecting the cube became a greater priority for manpower than helping homeless populations, as it had its own armed security detail. No object should receive more security than real people are given.

Unfortunately, the cube only represents a larger issue. Under capitalism, rich people get to do whatever they want with no consequences. Case in point, Jeff Bezos is attempting to dismantle a historic bridge to allow his superyacht to pass through. Social injustices should never take a backseat to such useless, pathetic endeavors.

Ironically, the gold cube did manage to make an artistic statement — just not the one it sought out to make. Instead of successfully romanticizing cryptocurrency, it made a point about the skewed priorities of the American economy. We value useless social structures above people. We value wealth above everything. Cryptocurrency, in particular, represents the complexity of value. We place so much importance on something that’s nothing more than a digital representation of money. Our monetary system has enough unsolved issues without warranting the creation of an entirely new currency. On top of that, Castello’s cube is launching an NFT auction on Feb. 21. NFTs place inflated values upon random digital assets that we do not need.

It bears a frightening resemblance to dystopian themes depicted in film. For instance, “The Hunger Games” critiques capitalistic food distribution in a lavish party scene. In it, rich socialites binge and purge food using a gag-inducing pill. Meanwhile, citizens in surrounding districts starve under severe food insecurity. This scene perfectly illustrates our real world, where people like Castello can create a meaningless cube from invaluable minerals while poor people freeze to death right next door.

Overall, the gold cube demonstrated our country’s abhorrent resource allocation. We cannot support any system that allows for such skewed prioritization and extreme inequality. No wonder the U.S. has the worst income inequality in the developed world. While we experience this reality, a poorly placed gold structure inside of Central Park seems very Hunger Games-esque. So please, let’s not entertain the profoundly wasteful escapades of top one-percenters any longer.