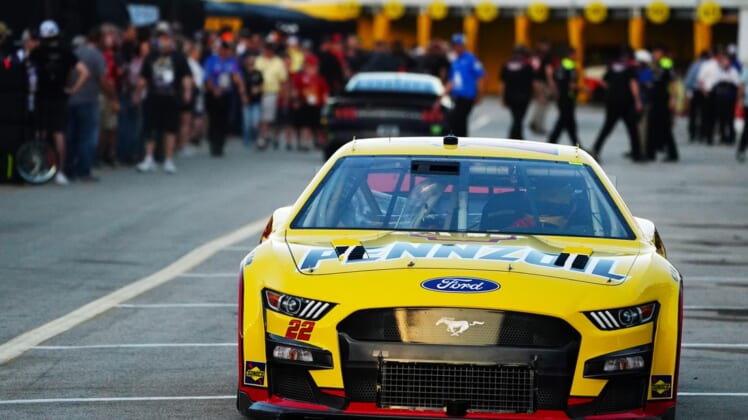 It’s not just because the new NASCAR Cup Series Next Gen cars have gone to a single center lug instead of five lug nuts to secure each tire.

And it’s not just because the fuel cell capacity has increased roughly 8 percent to 20 gallons, increasing the time necessary to fuel the car.

As Stenhouse points out, there are other factors that radically alter the process of getting to pit road — namely the new five-speed sequential transmission and the larger brake package on the Cup cars.

“Coming to pit road is totally different,” Stenhouse told NASCAR Wire Service on Saturday morning. “You’re wide open until you get to the end of the (Turn 4) grandstands at least — and pit road is not far away.

“And then the brake package we have on the car, and the drag and the downforce we have, you can get it stopped before you get to pit road. I know (Kyle) Larson said it caught him off guard the other night (in the Bluegreen Vacations Duels), and he was way too conservative getting to pit road.”

The new transmission also requires a different process with the shifter and clutch.

“Getting into your pit box is difficult,” Stenhouse said. “You’re downshifting on the way into pit road. So you get to second gear from fifth. When you come into your pit box, you would always just throw it in neutral.

“Now you have to push the clutch in and go through first, then go to neutral to get there. Then you can release the clutch and pull into your pit box. Or I’ve thought about leaving it in first gear and leaving the clutch in, because when you put these cars in gear, it really turns the rear tires a lot.

“You can’t do that when they’re trying to change tires, or, obviously, you’ll mess them up.”

In the second Duel, Stenhouse’s crew chief, Brian Pattie, told his driver to leave the pit stall on his command, rather than on the drop of the jack.

NFL Hall of Fame running back Emmitt Smith joked that some people invest in cryptocurrency, but he’s making what he hopes to be a more promising investment — buying into the No. 34 Jesse Iwuji Motorsports team competing in the NASCAR Xfinity Series, with Iwuji steering the Chevrolet.

Smith and Iwuji said they initially wanted to grab the No. 22 car number for the team — the same number Smith worse in his NFL career with the Dallas Cowboys. But ultimately the race team said it found a better option in No. 34, the same number Black driver Wendell Scott — a NASCAR Hall of Fame member — used when he competed in the sport’s top series from 1961 through 1973.

“I think there’s tremendous opportunity here,” Smith said. “NASCAR has actually opened the door for minorities to come in and actually own their teams. Ownership is really the key to any type of change you really want to create. If you don’t own it, you can’t really change it. It’s not a bottoms-up approach; it’s really a top-down approach. I’ve never seen a poor person tell a rich person how to invest their money.

“With that said, you have to be at the table to influence something in the most positive way.”

Iwuji, 34, from the Dallas suburb of Carrollton, Texas, has five NASCAR Xfinity Series starts with a best finish of 23rd at Texas Motor Speedway in 2020. His best finish in 15 NASCAR Camping World Truck Series starts is 17th, also at his hometown Texas track in 2019.

“I’m drinking out of a firehose right now trying to learn every aspect of this business from start to finish,” Smith continued. “I don’t want to learn how to put a car together, but I definitely want to understand some of the strategy and some other nuances about the sport I can actually learn. I want to learn about the businesses around the sport, and I want to learn how to help this man become successful in this sport. This is new. Everything is a learning curve.”

The Wood Brothers crew apparently did an admirable job repairing the No. 21 Ford Mustang driven by Harrison Burton.

The car was damaged on the final lap of Thursday night’s Bluegreen Vacations Duel 150-mile qualifying race, when Joey Logano’s No. 22 Team Penske Ford spun in front of Burton’s Mustang. The No. 21 nosed into Logano’s car, but the team opted to repair the car, rather than go to a backup.

Shaking down his car in Saturday’s final practice, Burton led a contingent of Ford drivers to the top eight positions on the speed chart. Burton negotiated 2.5-mile Daytona International Speedway in 47.782 seconds (188.355 mph), edging Logano (who was in a backup car) by .008 seconds.

Only 20 of the 40 drivers who will start the Sunday’s Daytona 500 participated in the session. The entire cadre of Toyotas skipped the session, as did Roush Fenway Keselowski Racing Ford drivers Brad Keselowski and Chris Buescher, who won their respective Duels on Thursday.