All a bird wants is a regular family to read around and have when he needs them. Too much to ask? 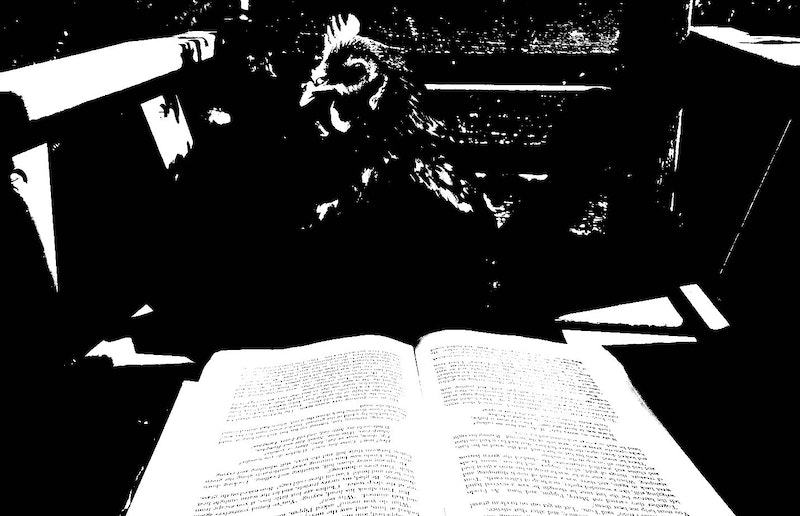 Bennington was watching the war at home. He was saying things that make me feel embarrassed to type: “Damn that’s crazy,” “Whoa,” “Did they do that?” Can you imagine living with, let alone being related, to such an idiot? I have to work on keeping my temper down ever since Monica forced me to quit drugs years ago yet continues to use and abuse herself. Yesterday I found her passed out behind double-locked bathroom doors with a needle in her wing. Luckily she was just “really high” and felt “incredible,” instead of, you know, dead. One would think a former addict such as myself would find behavior like this “triggering,” insensitive, or at least irresponsible, but honestly? It’s their lives. They can do what they want. It’s none of my business.

Monica wants to go fight in Ukraine. I asked her what side she was on. “…Yellow.” I was going to make a crack about her being a coward, inaccurate an insult as it may be, but provocative to say the least—I didn’t feel like losing my head that morning. I asked her what country “Yellow” was. “Azov Battalion.” WRONG ANSWER! “Oh, come on, Rooster. They just think it looks cool.” What, the SWASTIKA! “It’s honestly aesthetic.” My wife is centuries old and yet she talks like she goes to Euphoria High School. I’m just a simple rooster, trying to live my best life in a cabin in Marshfield, Massachusetts, but the world keeps getting in the way of my plans. Like so many broken eggs, I stand here helpless before the carnage around me.

Rooster isn’t my given name. I don’t like to talk about my early birdhood for a variety of reasons. This policy will continue indefinitely. But know that I chose the name of my species, because I am “that bird.” I am the Everybird. Regular readers should know this by now, but it bears repeating: I’m not like my fucked up family. I don’t abuse drugs, I don’t associate with criminals, and I don’t have an urge for war or paramilitary operations. I just want to sit at home and read. There are so many doorstop classics that I still have to get to: Moby-Dick, Jane Eyre, The Red and the Black, Juliette. And who could it be but Bennington the other night interrupting my evening chocolate and chapters with some nonsense about cryptocurrency and “bored ape hoarding.”

“You don’t understand, Rooster. This is hot—and now’s the time to get in on the ground floor.” I told Benny that if celebrities were endorsing cryptocurrencies in Super Bowl commercials, then the time to “get in on the ground floor” has long since passed. What he doesn’t know is that I had our entire life savings converted from gold into bitcoin back in 2009. If either of them knew, they’d kill me. But since you all know now, let me explain something called “fractional reserve banking.” Basically, I collect interest on money that I don’t have. Our Bitcoin isn’t yet worth nearly the amount of gold that I had converted—which I really needed to get rid of anyway, it was, uh, “repatriated”—but it probably will be at some point in the 2020s. They don’t need to know for now that we’re going to be the richest avian family in the entire world. Eventually.

“Benny, what you don’t understand is how much of an idiot you can be sometimes. What you’ve described to me is a pyramid scheme. Do you know what that is?” And then he got up, turned around, walked out and slammed the door behind him. Needless to say, I couldn’t return to my chocolate and chapters this evening—what was wrong with him? Was he sick? Is he ill? Do Monica and I need to have him restrained and arrested? I went into the living room where I found him crying on the floor. “Benny, what’s wrong?” I patted his wing with mine. Slowly, he looked up at me. “You need to be nicer to us,” he said, “you need to be nicer to us.”