”If you have less money than Elon, watch out”, warns Bill Gates – Techstory

Bitcoin has been adopted and widely accepted by many celebrities and tech stars worldwide. But Bill Gates isn’t one of them. The billionaire Bill Gates, Microsoft co-founder appeared in an interview last year. ‘’If you have less money than Elon, watch out’’, warns Bill Gates. He warned that the cryptocurrency value could fluctuate that is basically it can be increased or decreased by a tweet from the Tesla Co-founder, Elon Musk. 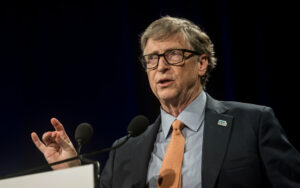 The video of Bill Gates’ remarks has once again resurfaced on the Internet and has gone viral just after US President Joe Biden signed an executive order on Wednesday that established the country’s “first-ever” federal Cryptocurrency strategy.

In the Interview, he said, “Elon has tons of money, and he’s very sophisticated, so I don’t worry that his Bitcoin will randomly go up or down,” Gates said. “I do think people get brought into these manias who may not have as much money to spare, so I’m not bullish on Bitcoin.”

Now let’s talk about Elon Musk. The richest man has a net worth of $233 billion. Even the Tesla CEO revealed that he’s not a bitcoin bull.

Elon Musk revealed on Twitter that he owns a fraction of one Bitcoin token. He said “I literally own zero cryptocurrencies, apart from .25 BTC that a friend sent me many years ago,” Musk confessed. Using today’s Bitcoin price of about $10,000 a coin, that translates to $2,500.

He made the revelation in response to a question about an online scam in which random users pose as celebrities (like Musk) to steal cryptocurre#ncy from people.

It didn’t come as a surprise to his fans that Musk didn’t care about Bitcoin, since he had revealed that “a friend sent me a few years ago part of a BTC, but I don’t know where it is.”

Coming back from the famous Bill Gates Interview. The co-founder of Microsoft added that the Bill and Melinda Gates Foundation actually “engages in a lot of cryptocurrencies,” but only when “you see who is making the transaction.” Gate believes that “digital money is a good thing”, especially when used to fund poorer countries and get “money to their citizens very efficiently.”

Now, what is the Executive Order signed by Joe Biden?

The President signed an Executive Order outlining a whole-of-government approach to addressing the risks and maximizing the benefits of digital assets and their supporting technologies. A national policy for digital assets is outlined in the Order, which outlines six key priorities: consumer and investor protection; financial stability; illicit finance; U.S. leadership in the financial system and economic competitiveness; financial inclusion; and responsible innovation.

Janet Yellen, Treasury Secretary, said the effort would “promote a fair, more inclusive, and more efficient financial system” while countering illicit finance and preventing threats to financial stability and national security. According to a senior administration official who previewed the order on the condition of anonymity, the Biden administration sees cryptocurrency’s explosive popularity as an opportunity to explore the risks and benefits of digital assets.

If you find this article informative then do not forget to share it with your friends and family!