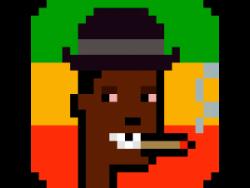 Late singer and sound system owner Sugar Minott, Anthony B, Jesse Royal and Jah9 are among the reggae artistes whose works will form a part of CryptoRastas second non-fungible token (NFT) auction on April 1.

CryptoRastas markets itself as “the first NFT collection for reggae culture” and the founder Marcus Menezes, more popularly known as Digitaldubs, got involved with reggae music when he started his sound system in Rio 20 years ago and worked with many foundation artistes. He was joined on the NFT venture by Yaak Studio who developed the generative art system and smart contracts for the project.

CryptoRastas, which is now celebrating its first anniversary, has become the premier go-to NFT representing reggae art and culture on the blockchain. Menezes explained that a NFT is a unique digital asset that represents ownership of real-world items like art, video clips, music and more. NFTs use the same blockchain technology that powers cryptocurrencies, but they’re not a currency.

“This Friday, the auction starts at 4:20 p.m. EST and it drops on Opeansea. It will last for 24 hours with bids starting at one etheruem. In the cryptocurrency block chain, this is equivalent to approximately US$3,000. The value fluctuates so I have to check it daily,” Menezes told The Gleaner.

On Monday, the value of one etheruem was actually US$3,417.

Headlines Delivered to Your Inbox

This will be the first NFT for all 10 artistes involved, and Menezes is excited that it will allow them to see the earning potential of this new economy. He shared that at first, owing to the novelty, it was a bit difficult to persuade some artistes to get on board, but those who knew him, trusted his judgement and got involved with CryptoRastas. According to Menezes, the venture has been successful.

“We started from humble beginnings to learn about the NFTs. It started to sell and it started to sell some more and you can make quite a good income. We have done more than 10,000 NFTs in one year and so I can say that it is a success. We are now part of a big community supporting the artistes and the culture. There are people from Jamaica, the Caribbean, the United States, Europe, and Asia who are involved in NFTs and Crypto,” he explained.

His company receives a percentage of the money made at the auction, “but the major part of it goes to the artistes”.

Menezes added, “The project keeps breaking digital barriers and bringing reggae vibes to the NFT scene, creating an environment where the community can connect through the culture, enjoy benefits, exclusive parties, festivals, exclusive merch, and most importantly, share ideas and help each other in this new space.”

This auction is part of a limited edition of 200 avatars representing reggae celebrities, but the complete collection has 10,420 NFTs, which are fictional characters created with the help of a generative algorithm.