The cryptocurrency guide for the perplexed: Dogecoin (DOGE) – Equity.Guru

Feted by billionaire moguls, celebrities, and more, it’s gone through its ups and downs in its short history. Originally, the strata went like this: Bitcoin is digital gold. Litecoin is silver. Dogecoin is the tipping coin. One day it was possible that you’d use doge to tip your waitress after a night out.

With the profusion of second gen, third gen, altcoins coming out, that might not be the case anymore.

It was created by an IBM software engineer named Billy Markus and an Adobe software engineer named Jackson Palmer with the intent of building a digital currency that could reach more people than Bitcoin. They also wanted to build it to be a new and distant start away from other coins with bad reputations. Doge launched on December 6, 2013 and within the first month, there were over a million visits to dogecoin.com

Most of us know what dogecoin is. It’s the first funny-dog coin, showing off the shiba inu that Elon Musk loves so much. Palmer bought the domain Dogecoin.com and added a splash screen with the coin’s logo while Palmer designed the coin’s protocol based off of Luckycoin and Litecoin. That means a proof-of-work consensus mechanism and scrypt technology. Scrypt means miners can’t use the same equipment needed for mining bitcoin, but need either FPGA and ASIC rigs for mining. These are more expensive.

Naturally, all of that would be moot when bitcoin went bigtime, and now if anyone tells you they’re still mining Bitcoin in their basement on their CPU, inquire how their power bills are doing. Also, they’re probably lying.

Regardless, by mid December, Doge tripled, rising from US$0.00026 to $0.00095. The rest of the coins operating in the sphere were still licking their wounds from the first time China decided to swing its massive power around and forbid Chinese banks from investing in Bitcoin. Three days later, Doge dropped 80% because, you know, it’s a cryptocurrency and that’s what they do. Also large mining pools exploited the small amount required to mine it.

Dogecoin was hacked on December 25, 2013, when millions of coins were stolen from their online cryptocurrency wallet, Dogewallet. The hacker slipped in through the platform’s filesystem and participated in some techno-wizardry involving their send/receive page and sent all coins to a static address.

In typical fashion, the Dogecoin community, started an initiative called “SaveDogemas” to help donate coins to the victims of the theft. It took them a month to raise that amount making the community both strange but definitely keeping with the spirit of the holidays.

A month later, the trading volume temporarily leapt out in front of Bitcoin and all other cryptocurrencies combined, even as its market cap never quite made the jump. It still hasn’t and probably never will. They decided to change their standard randomized reward for each mining block to a static block reward, which probably gave them all a decent bounce in sentiment.

Departures and new directions for Doge

Jackson Palmer left the cryptocurrency community in 2015 having come around to the idea that cryptocurrency had abandoned its core function of being a libertarian alternative to money and instead turned around and become a fundamentally exploitative technology designed to make a small group of its holders rich at the expense of everyone else.

Dogecoin hit $0.017 per coin on January 7, 2018, bringing its market cap to $2 billion after the 2017 cryptocurrency bubble. This wasn’t exactly the beginning that most thought it was going to be, much like plenty of folks thought about other crypto. The crypto winter arrived and we didn’t see another impressive price bump until July 2020, when a trend on TikTok aiming to get the price to $1. It didn’t work.

In recent years Dogecoin’s had some peculiar price fluctuations based on external attention. In January 2021, it went up 800% in a day, bumping up to seven cents courtesy of Reddit users, Elon Musk and the GameStop short squeeze. The following month, it went to eight cents 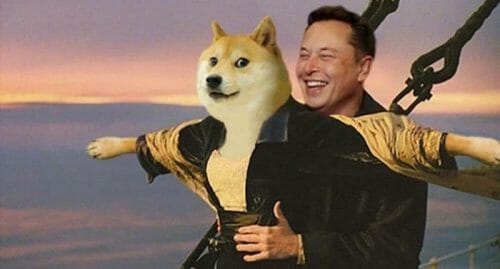 courtesy of Musk, Snoop Dogg and Gene Simmons. In March it was Mark Cuban‘s turn when they accounted the Dallas Mavericks, which he owns, would be accepting Doge for tickets and products.

The coin got another bounce with Coinbase (COIN.Q)’s direct listing in April 2021, and hit a new high of $0.45 on April 16, which was a substantial bounce of 400% with a volume of nearly $70 billion traded in the day before.

Seriously. The joke coin that nobody thought would be worth anything made millionaires overnight. That’s the hidden promise of the cryptocurrency sphere, at least for the time being. Gather enough market sentiment, and get some big name influencer like Elon Musk to fan the flames and you can ride the wave to a life-changing amount of money.

By this time, Doge’s market cap approached $50 billion and put it firmly in fifth in size by market cap. In contrast, today it’s presently at $17,8 billion and in 12th,. It hasn’t been getting the same pump it did last year. The age of Robinhood’s cryptocurrency system taking a dive courtesy of being overloaded with people buying doge are gone.

The bubble’s burst and the hordes have moved on.

Granted, Elon still makes an appearance now and again. Last May he showed up on Saturday Night Live, SpaceX announced a mission to the moon funded by Doge.

If viewed in an uncharitable light, this could be seen as a mockery of cryptocurrency in general. How easily the market is swayed by sentiment in the compete absence of fundamentals. Especially for a coin like Doge, which has no functional utility. You can’t make smart contracts or D’apps with it. You can’t really use it to buy anything anywhere (and in the rare exceptions that’s not the case, it’s noteworthy) and the only reason people hold it is when there’s the speculative possibility to making money from a new bubble.