TABOO Announces its First-Ever Mansion Party with Supermodels – Are You Attending? Do You Qualify? – NewsBTC 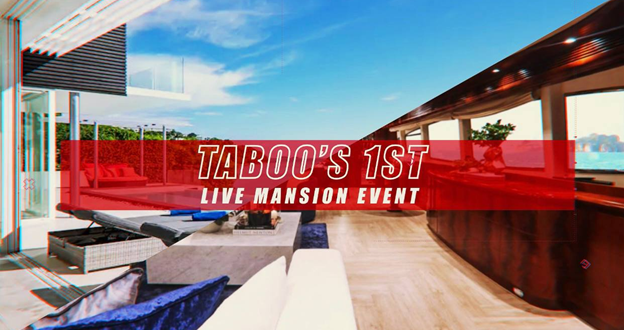 Just twelve months in and with over 45,000 savvy investors already, Taboo is firmly poised to shake up the adult entertainment industry. What’s more, they have just announced the first-ever mansion party which will give top-tier investors the chance to mingle with the full lineup of Taboo supermodels in a sun-soaked setting.

For anyone who might not yet know, Taboo is a project like no other. It aims to fill the gaps that have long existed and reach levels that no other major player has to date by employing decentralization and providing innovative solutions to even the most intricate of the industry problems. To put it simply, Taboo aims to become the Playboy of Blockchain.

$TABOO ranks amongst the top 500 cryptocurrencies globally. While most of the other adult entertainment projects have nothing exciting to offer, Taboo has partnered with top playboy models, celebrities, and fashion icons. Below is the list of some models currently associated with Taboo, each one having tens of thousands, if not millions of online followers:

The platform recently launched its native marketplace with cutting-edge functionalities and has redesigned the UI/UX. Users can now purchase the $TABOO token, sell and trade the platform’s native NFTs, or stake their current holdings to earn a guaranteed APY (Annual Percentage Yield) of 16%.

The Taboo marketplace works on a 4-tier system, where each tier gives access to a higher level of content in the form of an exclusive NFT collection. The tiers are set depending on the models/celebrities in that tier, and further content can be accessed after users meet the required conditions. Access to Tier 1 is free and open for all, while for Tier 2, users will either have to hold $2500 worth of $TABOO in their wallet or stake the same amount. For Tier 3, the required amount of $TABOO tokens increases to $5000. And after much anticipation and numerous requests, Taboo has finally opened up Tier 4!

Tier-4 on Taboo is as good as it gets. In essence, it gives access to everything one has ever wanted from the adult entertainment industry and more. Investors need to hold or stake $TABOO tokens worth $10,000 to become a member, and Taboo is offering until the end of June 2022 to claim the membership.

Tier 4 investors, not only receive access to exclusive content available in the first three tiers, but will also receive an invite for a fully-expensed trip with all the models Taboo has collaborated with, which includes names like Khloe Terea, Holly Barker, CJ Sparxx, Jenni Summers, Syd Wilder, Marie Madore, CJ Franco, Anya Benton, Claudia Fijal, Noel Leon, Quiggle Ignacio, Allie Mason, Magdalena K, and a few special guests who are yet to be revealed.

The event will be held in a colossal mansion on a beautiful island in Thailand from Aug 12 to Aug 15, 2022. The exciting event includes:

Please remember, the cut-off for becoming a Tier 4 holder and gaining an invite to the event is the end of June 2022.

The mansion event will be promoted on all available channels and pushed extensively in both the digital and print media. This marketing will ensure full media coverage, and the participation of renowned celebrity photographers, vloggers, paparazzi, DJs, fire spinners, fireworks, live entertainment, and security throughout the 4-day event.

Furthermore, Taboo has released the highly anticipated TABOOPUNKS, the platform’s own NFT collection. Owning one of these provides a direct ticket to exclusive VIP parties with supermodels for the branding and promotion of the project. In addition, investors who own the TABOOPUNK NFT will have access to all areas of the marketplace and some under-development or yet-to-be-released utilities, such as the Taboo Metaverse.

A TABOOPUNK is not just an NFT but a gateway to success, owing to the utility factor which provides unlimited access to the platform and many of its events. Although owning a TABOOPUNK does not reap all the benefits that come from a true, qualified T4 holder(such as Mansion invites), Taboo still plans to hold certain live events, with a TABOO Festival coming up in Q1, 2023, where only those who own a TABOOPUNK NFT can be in attendance.

Taboo is the perfect example of the recent technological developments, optimal utilization of blockchain technology, and how putting in an equitable amount of effort in the right direction can get things to go the desired way. Version 2 and Version 3 of the Marketplace are soon to be launched and have the potential to revolutionize the industry.

Moreover, Taboo has managed to achieve the goals and timeline set initially, and all credit goes to the relentless Entrepreneurial team as well as the strong community of over 45,000 investors. Taboo is in the process of partnering with more models and marketing the platform on a global level.

$TABOO is currently listed 30x below the all-time high, but don’t be mistaken, it has managed to grow 100% in the last two weeks, ever since the mansion event was announced. So, investors can consider it a discounted price and start investing in $TABOO before the price reaches and then surpasses its previous highs.

To learn more about Taboo, visit the official website: https://taboo.io

You can also follow Taboo on all available social media handles and channels to stay updated with the latest developments and news: