An estimated $5.4 million worth of cryptocurrency has been lost to scams perpetrated in the name of Tesla (NASDAQ: TSLA) CEO Elon Musk from 2018 to May 2022, an analysis conducted by blockchain visualization and risk mitigation software company Blockchain Intelligence Group (BIG) has revealed. 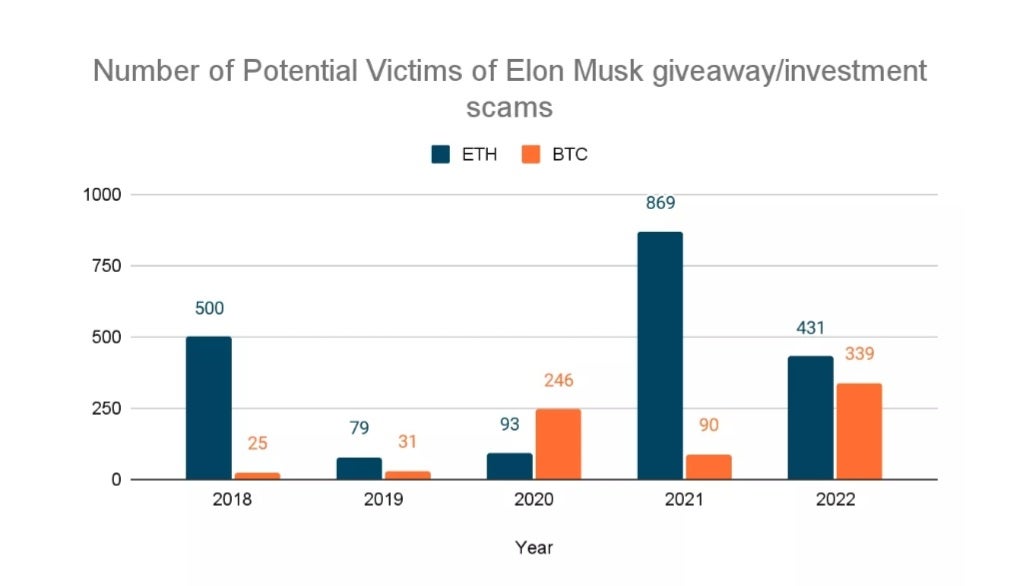 The data shows that 2021 saw an exponential rise in such scams. This can be attributed to the cryptocurrency boom of 2021 and it coincides with the announcement of Tesla’s $1.5 billion dollar Bitcoin (CRYPTO: BTC) investment in February 2021.

“Over this period, about $5.4m were stolen in BTC and Ethereum (including ERC-20 tokens like Shiba Inu) in such scams,” the BIG report states.

William Callahan, Director of Government and Strategic Affairs at BIG and a former US Department of Justice Special Agent says since Musk is the most well-known cryptocurrency advocate, bad actors frequently take advantage of Musk’s popularity and influence to defraud unsuspecting consumers.

“Scammers go to great lengths to make their schemes look legitimate, impersonating him, hacking his Twitter account, and promoting scams with Deep Fake Videos of his interviews,” Callahan adds.

Giveaway scams are attempts to trick victims into thinking that a legitimate cryptocurrency exchange or a celebrity is funding a cryptocurrency giveaway.

Scammers began impersonating Musk in 2018 to trick investors into thinking he was giving away BTC. A message for a BTC giveaway scam was made and disseminated by several verified Twitter accounts impersonating Musk. 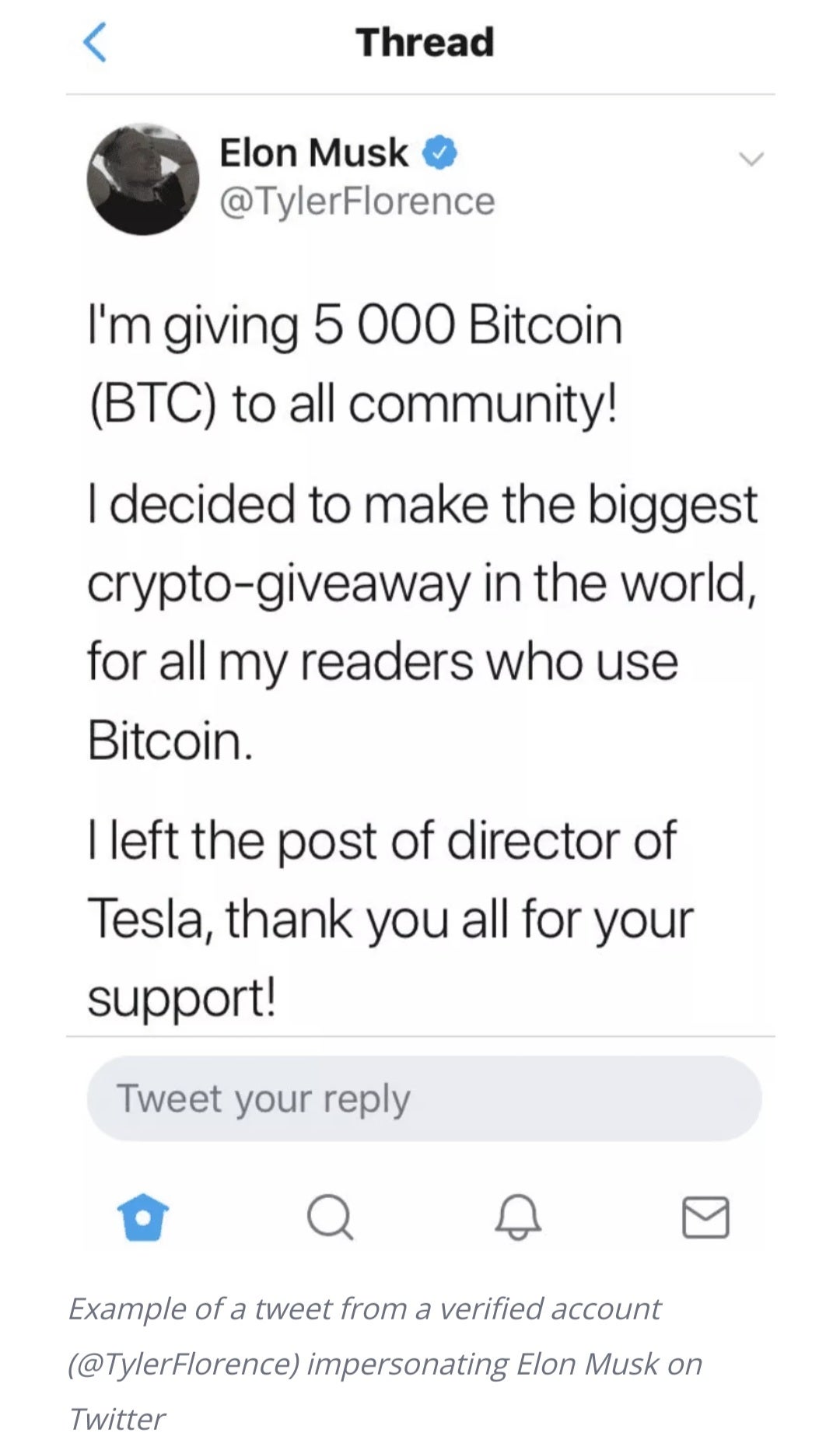 Doubler scams guarantee to double any cryptocurrency deposit made through the scam’s site. Several YouTube accounts were utilized in June 2020 to entice owners of cryptocurrencies into fake Tesla and Musk giveaways that were later discovered to be doubler scams. 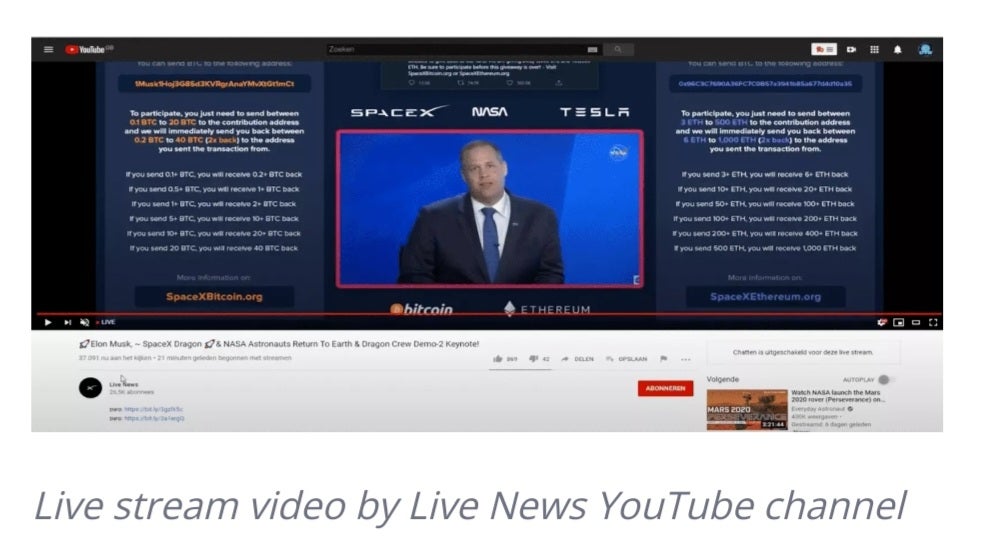 While new currencies are continually added to the blockchain, and new trading platforms are being developed, smart contracts with attractive returns may be used to market a fraud. A corporation may claim to have an opportunity to invest with guaranteed 1000% profits. The victims are then lured into an investment scam, where they buy the currency intending to sell it when prices increase.

This year, scammers tried marketing a trading platform called BitVex using Deep Fake Videos of Musk and other prominent Bitcoin proponents to steal assets. These videos are real interviews that have been altered with Deep Fake Technology to use the subject’s voice in a script written by the criminals. 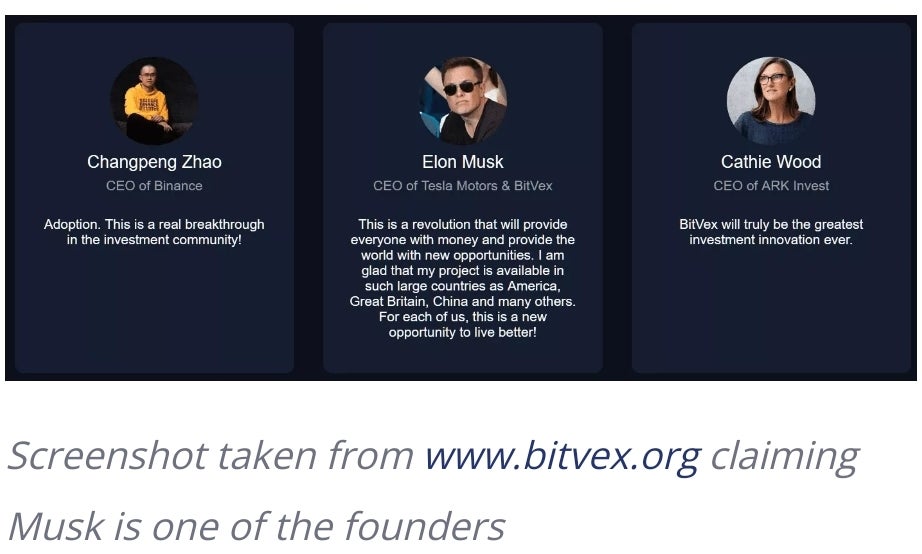 BIG states investors should watch out for the following:

Claims of a safe investment: Trading cryptocurrencies involves many risks, including unpredictable market price fluctuations or flash drops, market manipulation, cybersecurity threats, and the possibility of losing your entire investment. Any cryptocurrency offer that guarantees you will make money is in all likelihood a scam.

Promises of free money: Any service or individual offering to double the cryptocurrency you send them is a scam. Bitcoin doublers do not exist. Even if a celebrity announces a giveaway, it is highly unlikely that they would ask you to send them any funds.

This article was submitted by an external contributor and may not represent the views and opinions of Benzinga.