NFTs crashed harder than any tech stock – can they survive? – FOX 28 Spokane 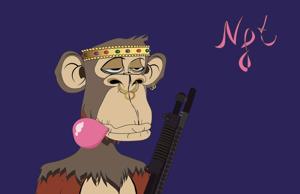 In August of 2021, Warriors superstar Steph Curry spent $180,000 for a one-of-a-kind digital artwork of a cartoon ape and posted it as his Twitter profile picture.

It was all part of “Hollywood’s NFT summer” in 2021, according to Coinbase, a cryptocurrency company with executive offices in San Francisco. NFT sales hit their peak on Aug. 29, 2021, when American NFT collectors spent more than $248 million in one day on nonfungible tokens, according to the NFT data website NonFungible.

This summer is different.

In late June of 2022, U.S. daily sales of nonfungible tokens dipped under $2 million a day. That’s a decline of 99.2%. The cheapest Bored Ape NFTs were listed at $429,000 in April. They are now less than $100,000. Curry and some other celebrities have unceremoniously taken them down from Twitter.

“All the prices across NFTs have been really, really high. We’ve seen a lot of the NFTs that were bought for hundreds of thousands of dollars a year ago can only fetch a couple of thousand now in this market,” says Robert Le, an NFT expert at the tech analysis company PitchBook.

The website nftpricefloor.com tracks the lowest prices that 380 different series of NFTs have sold for, a metric called the “price floor.”

“Most collections are going to zero. I mean, 90% of collections,” says the website’s cofounder, Nico Lallement. “I don’t think we will see more than 20 communities really thriving.”

NFTs are not real-world pieces of art. They exist on blockchain, the encrypted computer code that keeps track of cryptocurrency, which is also having a rough couple of months. At the end of March, bitcoin, the most popular and highly valued cryptocurrency, was trading at around $47,000. On June 28, it was trading at less than $21,000.

Whether the economy sinks into a recession or deftly ekes out an escape, we must learn from what has happened with NFTs, say analysts, economists and tech workers, some of whom have lost their jobs during the decline of NFTs, cryptocurrency and tech stocks.

What has happened is the implosion of an over-inflated area of tech that gobbled up cash without ever establishing usefulness. And this happened at a time when the world was struggling through a pandemic and American companies were feverishly evolving just to stay alive.

“All the prices across NFTs have been really, really high. We’ve seen a lot of the NFTs that were bought for hundreds of thousands of dollars a year ago can only fetch a couple of thousand now in this market,” says Robert Le, an NFT expert at the tech analysis company PitchBook.

Bubbles happen: Sectors of the tech world get over-inflated with unjustified valuations and then they burst, with stock prices tumbling down. But if crypto was the bubble, NFTs were the bauble, the entirely decorative hood ornament on a car that slammed into a wall going 120 mph.

Yet Coinbase, the decentralized cryptocurrency company that has executive offices in San Francisco, held a three-day event in a trendy Manhattan event space in late June of this year, celebrating NFTs. Even in the audacious world of cryptocurrency, that took chutzpah.

Coinbase fired a quarter of its workforce, about 1,500 employees, over the past two months. Around 1,100 were laid off, and another 400 who had accepted job offers had them rescinded. Other companies have laid off workers too, but Coinbase has grown at a ferocious pace, tripling its headcount in the past year, and vowing to hire 6,000 in 2022.

That downfall was marked by an NFT failure, say analysts and employees.

The company opened an NFT marketplace in May, where artists and collectors could post, buy, sell and trade digital art collectibles. But development of the project was slow, it was late to market, and it fizzled. Few people took part in a beta launch, and then the NFT implosion began. Le, the PitchBook analyst, said it was a missed opportunity.

“Coinbase struggled to get the NFT marketplace up and running,” Le told The Examiner. The company could have taken marketshare from OpenSea, the largest NFT marketplace. Coinbase had 60 million customers who traded cryptocurrency on its platform. What happened?

“It was delivered too late, a year after NFTs’ peak, and people weren’t interested anymore,” says a Coinbase employee who asked to remain anonymous, but whose employment was verified on the social network Blind, which requires a work email address to register. Coinbase executives from the previous generation of tech companies like Facebook and Netflix didn’t understand the market, the employee said.

“It was like asking boomers who ran a really fine gourmet restaurant to quickly open a boba tea stand for millennials,” the employee said. “They just had no idea how to do that.”

The company did not immediately respond to requests for comment.

Coinbase is not the only company invested in NFTs that is persevering despite the withering drop in values. NFT marketplace Magic Eden, a San Francisco startup, raised a $130 million Series B funding round in June. NFT startups have raised $2.9 billion this year, according to PitchBook data.

Despite the wealth of venture capital still pouring into NFT startups, PitchBook notes in an analyst report that “trading volumes of the once-hot tokens have cratered, casting uncertainty over their future.”

Yet many believe that NFTs do have a future. The big losses have come from series of digital art like the Bored Ape collection, which could be used as social media profile pictures but served no real purpose other than being a status symbol.

Le, the PitchBook analyst, believes NFTs will be used by companies purchasing “carbon credits,” or tokens proving they have paid for the right to emit greenhouse gases, a practice being explored by a company called Evergreen Carbon. Investor and internet celebrity Gary Vaynerchuk believes sports tickets will soon be issued on NFTs. Some real estate experts believe NFTs could be used for land titles to prove ownership.

That may be a way forward, a way for NFTs to evolve beyond the Bored Ape Yacht Club. Those NFTs may have been all the rage last summer, but that time is over, believes one renowned tech veteran.

Bill Gates, someone who knows a few things about lasting value in tech, said sarcastically in June that, “Expensive digital images of monkeys are going to improve the world immensely.”