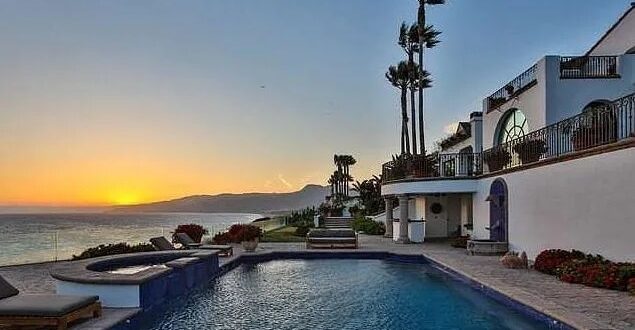 Marc Andreessen, 50, and his longtime wife, heiress Laura Arrillaga, who spent a record-breaking $177 million on a bluff-top property in Paradise Cove last October, apparently decided they needed even more of a good thing.

According to the Wall Street Journal, they now have spent an additional $44.5 million to buy two adjacent parcels just below their bluff-top place, on sandy Escondido Beach with 130 feet of ocean front.

They then spent $34 million more to buy a third adjacent property in an off-market deal — also just below the bluff-top on the beach — with 57 feet of beach frontage. That property has a 3,600-square-foot updated house built in 1973. It was previously owned by a group of investors that included local builder Scott Gillen.

On the first additional purchase, one parcel has a 7,000-square-foot house, and the other parcel has parking for 14-plus cars, a guest house, and an oceanfront swimming pool.

That property was sold to Andreessen by longtime Malibu residents Richard and Liane Weintraub, who acquired it in 2018 for $19.5 million. The couple hired two architects (including Malibu’s Doug Burdge) to update the 1991 house and turn it into a sleek white contemporary.

The Weintraubs put the property up for sale last summer for $55 million, which they later lowered to $51.5 million. The buyers negotiated an additional $7 million discount.

Long-time Malibu resident and actor/writer Daniel Stern, 64, and his wife Laure have put their Point Dume ranch house up for sale for $14.95 million after living in it for 30 years.

The secluded house sits on almost two acres on a cul-de-sac, with mature trees and gardens, a swimming pool and deeded beach access. The updated 1959 house has five bedrooms and baths in 4,325 square feet.

Although perhaps best known by the world as a bumbling burglar in two “Home Alone” films, Stern has also been an active member of the Malibu community — he was one of the founders of the Boys & Girls Club of Malibu in the 1990s, and served as chair of the Malibu Cultural Arts Commission. In addition, he is a bronze sculptor and father of California State Sen. Henry Stern.

Located on bluff-top Birdview Avenue on Point Dume, the Julia Lebedev mansion was acquired in a cash deal by an entity linked to Charlie Anderson, a Knoxville businessman with controlling interest in the Anderson Media Corporation. This is the largest transaction on Point Dume since Johnny Carson’s former home sold for $40 million three years ago, according to Dirt.

Julia Lebedev, a Los Angeles-based film producer, is the oldest daughter of billionaire Russian oil trader and former politician Leonid Lebedev, a onetime senator, according to Dirt. Leonid, once one of Russia’s elite, was “exiled” from the country in 2015 after being accused of embezzling hundreds of millions, which he denies.

Lebedev, in her late 30s, was born in LA and is married to Jonathan Moss. They currently live in Los Feliz.

According to Dirt, Coleman and wife Stephanie Ercklentz Coleman — who appeared in the infamous 2003 documentary “Born Rich” alongside Ivanka Trump and Georgina Bloomberg — already own several estates, including an oceanfront mansion on the Hamptons’ “Billionaire Row” and a $100 million duplex near Central Park.

Last summer, the couple bought two homes from two different sellers in two separate off-market deals on Point Dume, totaling $56 million. Said to be “jogging distance apart,” the first property was purchased for $21 million and has a new mansion but no ocean view. The second property, bought for $35 million, has a much smaller, older house, but with stunning ocean views.