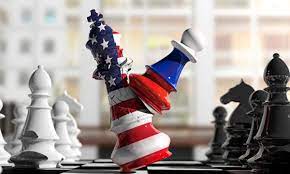 In order to impose economic penalties on Russia for its invasion of Ukraine, the U.S. government will not relent in its campaign against digital coin “mixers.”

The battle, which started in February, “is not going as anticipated for Putin,” said ranking member Pat Toomey (R-PA). However, I caution my colleagues that now is not the time for compromise or complacency. It’s time to break the Kremlin’s resolve to carry on with this conflict.

The Banking, Housing, and Urban Affairs Committee of the U.S. Senate convened a hearing on “Tightening the Screws on Russia: Smart Sanctions, Economic Statecraft, and Next Steps” on Tuesday. Sherrod Brown (D-OH), the committee chair, mentioned the need to impose “the economic sanctions aimed to damage Russia’s economy” in his opening statement.

Early in the conflict, a number of digital asset influencers praised “crypto” as a way for people to quickly and anonymously donate to the Ukrainian cause while also speculating that Russia could use digital assets to elude traditional financial systems and thereby evade the West’s economic sanctions.

Nevertheless, Russian authorities are still looking into the potential of digital assets for international trade settlement. In the meantime, the Office of Foreign Assets Control (OFAC) of the U.S. government is cracking down on cryptocurrency “mixers” like Tornado Cash, in part to reduce the possibility that sanctioned Russian oligarchs may manipulate the system. The fact that the Tornado Cash creator purportedly had connections to a Russian organisation that had previously been sanctioned by OFAC for aiding in “increasing Russia’s offensive cyber capabilities” didn’t help.

Both of these stories haven’t proven to be totally true, as crypto bros have shown to be much more concerned in promoting their own projects and/or collecting on airdrops that Ukraine promised (but never delivered). The Federal Bureau of Investigation stated that Russia’s “capacity to circumvent the sanctions with cryptocurrencies is probably significantly overstated on the part of maybe them and others” because even the largest digital tokens lack the liquidity required for Russia to make up the gap in its economy.

Only two witnesses were called at the hearing on Tuesday: Andrew Adams, the director of Task Force KleptoCapture at the Department of Justice, and Elizabeth Rosenberg, the Assistant Secretary for Terrorist Financing and Financial Crimes at the Department of the Treasury.

Although Adams praised the DoJ’s “strong and successful” efforts in pursuing sanction evaders involving “anything from cryptocurrency to trade-based money laundering,” Rosenberg made no mention of cryptocurrency or mixers in his opening statement. Sen. Elizabeth Warren (D-MA) raised worries about “Russian elites” potentially utilising cryptocurrency to escape sanctions, citing historical precedent set by North Korea, when Committee members were permitted to question the witnesses. The Digital Asset Sanctions Compliance Enhancement Act, which also focused on potential cryptocurrency use by sanctioned Russians, was proposed in March by a number of senators, including Warren.

Since the introduction of that bill, according to Warren, “many incidents of Russian businesses trying to avoid sanctions through crypto” have been discovered by the Treasury department. Rosenberg was questioned by Warren on whether “Russian oligarchs may use digital assets right now to escape sanctions.” Rosenberg said Warren’s hypothetical situation was “feasible.”

Warren then shifted his focus to the assertion that “many cryptocurrency advocates continue to maintain that cryptocurrency could never be utilised as a tool to escape sanctions… because blockchain is transparent.” Warren, using the term “mixers” as an example, claimed that “a entire industry has sprouted up to develop tools for criminal actors to tangle or disguise the trail of crypto transactions.” “Technologies that increase anonymity, like mixers,” Rosenberg retorted, “are absolutely a worry for understanding the flow of illicit financing and getting after it.” Warren asserted that certain crypto-celebrities were “furious” at these moves and were “fighting to have the chance to keep right on laundering money,” citing U.S. enforcement operations against the Tornado Cash and Blender mixers. Coinbase (NASDAQ: COIN), a U.S.-based exchange, was singled out by Warren for “financing a lawsuit against Treasury for its action to sanction these mixers.”

Rosenberg was questioned by Warren on whether penalties imposed on mixers would “strengthen our regime against Russia and other illegal actors.” “An effective route we can utilise to indicate that we cannot accept money laundering, whether that’s for a Russian criminal actor, an Iranian, a North Korean, or wherever they may originate from,” said Rosenberg of sanctions targeting mixers. sanctions from Russia

The Russia Cryptocurrency Transparency Act, also known as HR 7338, was approved by the House of Representatives on Tuesday. It was first proposed in March. Despite praising cryptocurrencies as “an effective cross-border payment tool to send millions” to Ukraine, HR 7338 notes that there are growing concerns that these digital assets could be used to get around the sanctions currently placed on Russia and Belarus because other sanctioned nations have done so.