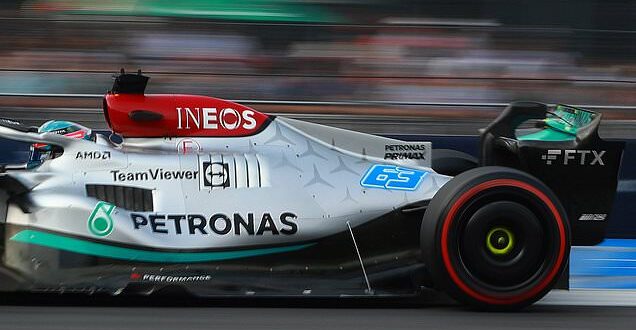 Crypto crash hits Formula One: Mercedes SUSPEND their partnership with collapsing exchange FTX and will remove their logo from cars as the company, who sponsor a long list of sports teams, files for bankruptcy

By Oliver Todd For Dailymail.Com and Reuters

The Mercedes Formula One team said today they had suspended a partnership agreement with troubled cryptocurrency exchange FTX ahead of the season’s penultimate race in Brazil.

FTX, one of the world’s largest crypto exchanges, later announced they are filing for bankruptcy and CEO Sam Bankman-Fried has resigned.

Mercedes signed a multi-year sponsorship deal with FTX in September 2021 when they were the reigning champions.

FTX have partnerships with a range of sports teams and stars including Tom Brady, Steph Curry, the Golden State Warriors, Miami Heat, Naomi Osaka and the MLB.

‘As a first step, we have suspended our partnership agreement with FTX,’ a team spokesman said.

‘This means the company will no longer appear on our race car and other branded assets from this weekend. We will continue to monitor closely the situation as it evolves.’

The Formula One season ends in Abu Dhabi on November 20.

Mercedes, with seven times world champion Lewis Hamilton and fellow-Briton George Russell, have yet to win a race this season.

After Bankman-Fried’s resignation, John J. Ray III, the Chicago-based lawyer who oversaw the liquidation of Enron after that company’s collapse, will take over as CEO to lead FTX through bankruptcy.

Brady, Curry and Osaka are among the athletes who have lost money in the recent crash of FTX. Curry inked a partnership with FTX in September 2021 – his first in the crypto space – and shared his excitement over the deal in a press release at the time.

Osaka, meanwhile, took an equity stake in FTX in March, which was described as a ‘long-term’ contract that would pay her in cryptocurrency.

But the pair’s partnerships with FTX now appear to be worthless, with the rapidly deteriorating company filing for bankruptcy.

Tom Brady appeared in commercials for FTX, including one with a flamethrower

Curry’s Warriors also have involvement with FTX, as the exchange agreed to pay the team $10million in December 2021 in an international rights sponsorship, as CNBC reported at the time.

In the deal, FTX obtained in-arena signage at the Chase Center, brand placements with the club’s G League and NBA 2K esports team, as well as rights to the team’s NFTs.

In March 2021, FTX also agreed to a deal with the Miami Heat for their arena’s naming rights for $135 million over 19 years.

However, Miami-Dade County now says it will explore ‘all legal remedies’ if FTX cannot pay its arena naming rights deal, The Information reported.