From Cricketers To Bollywood: Will NFT Marketplaces Become The New Insta For Indian Celebrities? – Inc42 Media

There are more than twelve NFT marketplaces in India 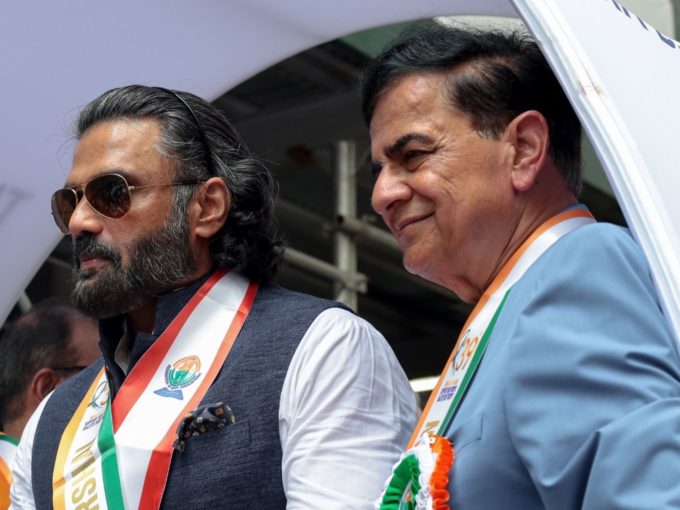 With the business value add of blockchain technologies poised to exceed $3.1 Tn by 2030, India’s crypto industry is booming. 15 Mn of the 100 Mn or so crypto users worldwide are Indians i.e. one in six crypto users is an Indian.

In the last two weeks, an emerging trend in the Indian crypto industry is that celebrities across domains — cricket and entertainment — are partnering with or investing in NFT marketplaces.

After Big B and Salman Khan, Suniel Shetty is the latest Bollywood celebrity to jump on the non-fungible token (NFT) bandwagon. Shetty is now an investor and advisor for Colexion, an NFT marketplace on the polygon network.

Colexion is a creative marketplace on the polygon network where fans can buy and trade in digital collectibles connected with cricket and entertainment stars. On the site, fans can purchase ‘collectible card’ NFTs, including ‘autographed cards’, video moments, and other tokens.

The Dubai-headquartered startup is about to launch NFTs of cricket stars like Danielle Wyatt and Kieron Pollards, and entertainment stars like actor Raai Laxmi and singer Mika Singh.

The collectibles can further be used for trading and games, according to the startup. Colexion will also offer ‘personalised digital museums’ for stars in entertainment and cricket.

“I strongly believe that the active involvement of sports legends and entertainment celebs in NFT space will bring up tons of hope and inspire artists worldwide who deserve the limelight”, says Colexion founder Bibin Babu.

The Rise Of India’s NFTverse

On June 1, 2021, crypto exchange WazirX launched the country’s first NFT marketplace. Since then, as many as 12 NFT marketplaces have come up or are planning to launch by the year-end.

NFTs are fast gaining mass acceptance in India. In August, Bollywood veteran Amitabh Bachchan released his NFT collection through BeyondLife.club, including poetry recited by the star, autographed movie posters and other collectibles. The collection will launch in November.

Bollywood actress Sunny Leone is another star who is set to launch her NFT collection. The star’s ‘NFT universe’ will be rolled out through silicon-valley based Mintdropz.

Just two days ago, Inc42 published an exclusive report of actor Kunal Kapoor and the founders of Nazara and Unacademy investing in Polygon-backed NFTically. 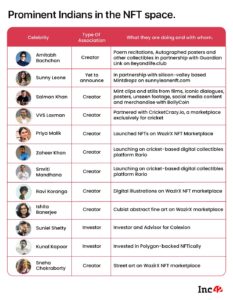 But, There Is A Dark Side

But as NFTs are gaining mainstream attention, they have also attracted a host of bad actors: the current market for the tokens have many concerns, including those of art and identity theft, ‘wash trading’ and environmental damage.

With a deluge of digital tokens entering the market, many sellers imitate and impersonate artists to sell counterfeit tokens. Wash trading refers to a method of market manipulation where the same trader buys and sells an NFT to inflate its value artificially.

The environmental costs of cryptocurrency mining is another concern that plagues the industry. The inventor of the world wide web Tim Berners-Lee described bitcoin mining as ‘one of the most fundamentally pointless ways of using energy”.

The global bitcoin network currently consumes about 80 terawatt-hours of electricity annually, which is almost as much as the entire country of Singapore needs in a year. But some crypto networks are already formulating solutions to this problem.

The Ethereum Foundation is switching to a different method of verifying transactions called Proof of Stake (PoS), which will reportedly cut down energy consumption by 99.95%.

But forgeries and plagiarism continue to plague the ecosystem. Many observers propose better regulation as an antidote for these issues. However, a centralised regulation platform would stand in direct contravention of the decentralised nature of most crypto networks.

Nobody knew that digital assets would become so popular in just a decade when Bitcoin was first launched. Apart from cryptocurrencies, digital assets like non-fungible tokens (NFTs) soared to popularity last year when celebrities, top entrepreneurs and sports stars started auctioning the NFTs through different platforms. In the blockchain community, NFTs have created a stir. […]

The working capital of Indian MSMEs would deteriorate further if the wholesale price inflation continues to remain in double digits, said Dr Madhavan Kutty, Aditya Birla Group’s senior economist. “MSMEs are badly hurt by rising commodity prices,” he said, against the backdrop of India’s wholesale inflation, gauged by the Wholesale Price Index, which rose to […]

What Are Altcoins? What Investors Need to Know – Finance Magnates

What Is an altcoin? In the crypto world, altcoin stands for alternative coins and is simply a term used for any cryptocurrency other than bitcoin. So, that makes Ethereum, the cryptocurrency with the second largest market cap an altcoin as much as the 3,000 ranked cryptocurrency. Altcoins are not required to be different from bitcoin […]