You go to YouTube and click on a video. A new page loads and one of those unskippable ads plays.

The ad is a clamor of flashy animations and thundering pop music featuring Ariana Grande, who wants to tell you about an incredible new cryptocurrency she just learned about.

I’ll give you a moment to think.

The only thing you know about this cryptocurrency at this point is that it’s endorsed by Ariana Grande. Would you buy that crypto?

Well, you might be surprised to learn that 20% of typical investors would be motivated to buy a cryptocurrency based on an endorsement from a celebrity or influencer.

And that nearly half of current cryptocurrency investors would do the same thing.

According to a September survey by market research firm Morning Consult, of 2,200 U.S. adults, 45% of crypto investors say they would invest in a crypto if a celebrity or influencer endorsed it.

This compares to 20% of the poll’s “typical investors” who say they would invest in a cryptocurrency if it were endorsed by a celebrity or influencer.

It’s important to note that the poll also found that the majority of people would be most influenced to buy cryptocurrency by financial advisors and people they know.

But the fact that 1 out of 5 “typical investors” — and nearly half of current crypto owners — would be motivated to buy a cryptocurrency based on an endorsement from a celebrity or influencer is significant and worth consideration. 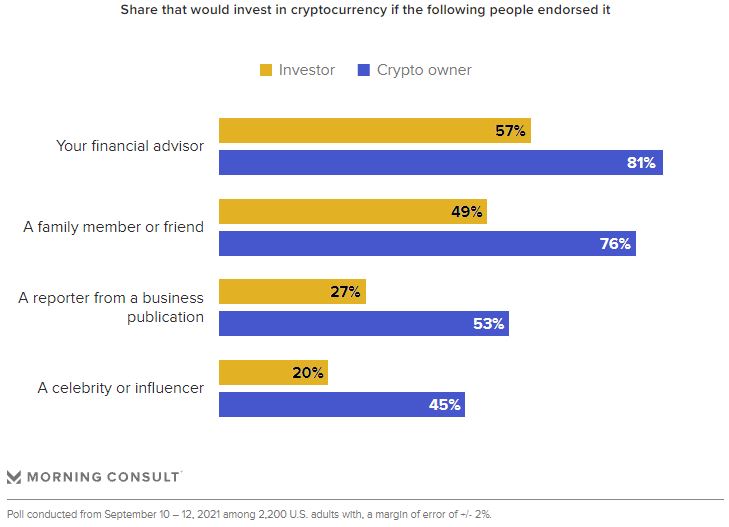 Of course the big question is why? Why would anyone be motivated to buy a cryptocurrency simply based on a celebrity endorsement?

Well, I’m sure there is a long and overly complicated answer involving the psychology of celebrity worship. But I think there is a simpler truth that’s more applicable to investors.

You see, I began asking people myself, “Would you invest in a cryptocurrency if the only thing you knew about it was that the crypto is endorsed by Ariana Grande?”

And I didn’t need to record responses. Because there was really only one response I got from people: No. But someone else will.

And, I believe, therein lies our answer.

“But someone else will.”

Why would anyone be motivated to buy a cryptocurrency simply based on a celebrity endorsement? They’re betting on a bigger sucker to come along later.

And chances are, there probably will be.

In proper terms, this is called the Greater Fool Theory.

The Greater Fool Theory is the idea that, during a bubble market, one can make money by buying overvalued assets and selling them for a profit later, because it will always be possible to find someone who is willing to pay a higher price. An investor who subscribes to the Greater Fool Theory will buy potentially overvalued assets without any regard for their fundamental value… Under this assumption, any price (no matter how high) can be justified since another buyer presumably exists who is willing to pay an even higher price.

Basically, there’s always going to be someone else down the line who will make poorer choices.

You’ll Never Be On The Inside!

So join Outsider Club today for FREE. You’ll learn how to take control of your finances, manage your own investments, and beat “the system” on your own terms. Become a member today, and get our latest free report: “Short Selling 101.”

After getting your report, you’ll begin receiving the Outsider Club e-Letter, delivered to your inbox daily.

Using the Greater Fool Theory is a great way to make money… until it’s not.

See, we tend to operate under the assumption that “a sucker is born every minute.” And, unfortunately, I think that’s true most of the time.

But it can’t be true all of the time. At one point, someone is going to be left holding assets no one else wants.

Just ask the investors at the top of the dot-com bubble.

Or ask the investors at the top of the real estate bubble.

Or go back 400 years and ask the Dutch at the top of the tulip bubble.

Playing the Greater Fool game is definitely not a guaranteed success because, sooner or later, the fools do run out.

But generally speaking, it’s a terrible idea to ever take crypto tips from celebrities. The fact is, their loyalty to the brand is relative to the size of the paycheck they were written to endorse it.

I’m sure you’ve at least seen the headlines: Dave Chappelle is in hot water again over controversial comments in his latest Netflix special “The Closer.”

But I want to quote him from the 2004 comedy special “For What It’s Worth” to wrap up my point about celebrity brand loyalty.

I don’t even know why people listen to me… I’ll say anything. I’ve done commercials for both Coke and Pepsi… I don’t give a *** what comes out of my mouth… I just say what it takes, whatever it takes, that’s what I’m saying. If you want to know the truth, can’t even taste the difference. Surprise! All I know is Pepsi paid me most recently so, tastes better. Pretty much how the game goes.

Luke’s analysis and market research reach hundreds of thousands of investors every day. Through his work with the Outsider Club and Junior Mining Trader, Luke helps investors in leveraging the future supply-demand imbalance that he believes could be key to a cyclical upswing in the hard asset markets. For more on Luke, go to his editor’s page.

You’ll Never Be On the Inside!

So, join Outsider Club today for FREE! You’ll learn how to take control of your finances, manage your own investments, and beat “the system” on your own terms. Become a member today, and get our latest FREE report: “Three Big Profit Opportunities in Solar”!

After getting your report, you’ll begin receiving the Outsider Club e-Letter, delivered to your inbox daily.