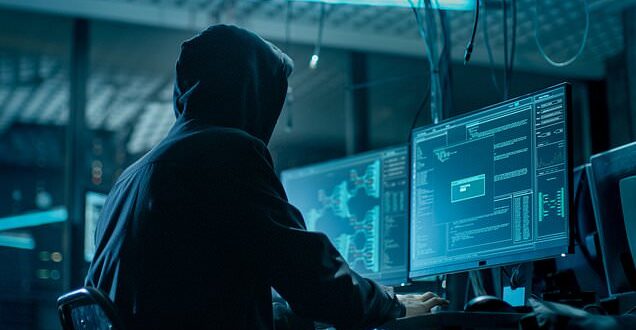 By Darren Boyle for MailOnline

Cyber criminals have stolen cryptocurrency worth more than £146m in the first nine months this year – a jump of more than 30 per cent compared with the whole of 2020.

Their specialist team of detectives have received 7,118 reports of cryptocurrency fraud since January resulting in a total loss of £146,222,332.

Criminals often use fake celebrity endorsements and flashy websites to convince victims that the opportunity is genuine. Teacher Julie Busnell from Farnborough in Hampshire lost £9,000 after responding to a bogus online advert. The criminals used an image of Elon Musk – who had no involvement in the scam – to convince victims the illegal enterprise was legitimate

Criminals target people who have invested money in cryptocurrencies such as Bitcoin with the average victim losing in the region of £20,500.

Temporary Detective Chief Inspector Craig Mullish of City of London Police said: ‘Reports of cryptocurrency fraud have increased significantly over the past few years, which is unsurprising given everyone is spending more time online. Being online more means criminals have a greater opportunity to approach unsuspecting victims with fraudulent investment opportunities.

DCI Mullish said one in ten victims were aged between 18 and 25 while more than half of those to lose cash were 18 to 45.

Criminals embellish their fraudulent advertisements with photographs of unsuspecting celebrities and use made up quotes to offer fake testimonials to make their offer look legitimate.

In a new report released today, Action Fraud said between April 2020 and March 2021, the agency received 558 investment fraud reports including a bogus celebrity endorsement. More than three quarters of these involved cryptocurrencies.

In some cases the criminals are seeking a victim’s personal details while often the main aim is to steal cash.

Teacher Julie Busnell from Farnborough in Hampshire lost £9,000 after being duped by a fake BBC News website that reported that Elon Musk had bought $1.5bn of Bitcoin and would double anybody’s cryptocurrency investment.

There is no suggestion the Tesla billionaire was involved in the scam.

Ms Bushnell, who is a teacher, committed £9,000 to the scheme and quickly realised it was a scam.

After reporting the crime, Ms Bushnell spoke to the BBC. She said: ‘

‘I wish I could have that time back – go in a time machine and not make those couple of clicks.

‘They have robbed me of my dignity, self-respect, self-worth and strength. They have sucked all the goodness of life out of me.

‘I want to raise awareness of this scam so it doesn’t happen to other vulnerable people.’

How to protect yourself from cryptocurrency fraud