Exclusive Interview: Welcome to the Jungle with Cyberkongz – Benzinga – Benzinga

Interview with the friendliest primates in NFTs.

Hot on the heels of our interview with Sneaky Vampire Syndicate, we wondered how to make this week’s column tie in with the spooky Halloween season. However, sales data for NFTs have solved that problem for us, having successfully spooked some NFT holders, making them sell faster than you can say #NGMI (Not Gonna’ Make It).

But the news hasn’t been all bad this week for the wildly creative NFT space which keeps attracting new faces — which is a good thing for representation and the mainstreaming of crypto and NFTs.

“NFTs are more than just pixels. It’s the intersection of culture, technology, and finance. It represents a new way of thinking about the ways in which value is accrued, harnessed, and distributed,” Brandon Buchanan, Managing Partner of Meta4 Capital said. 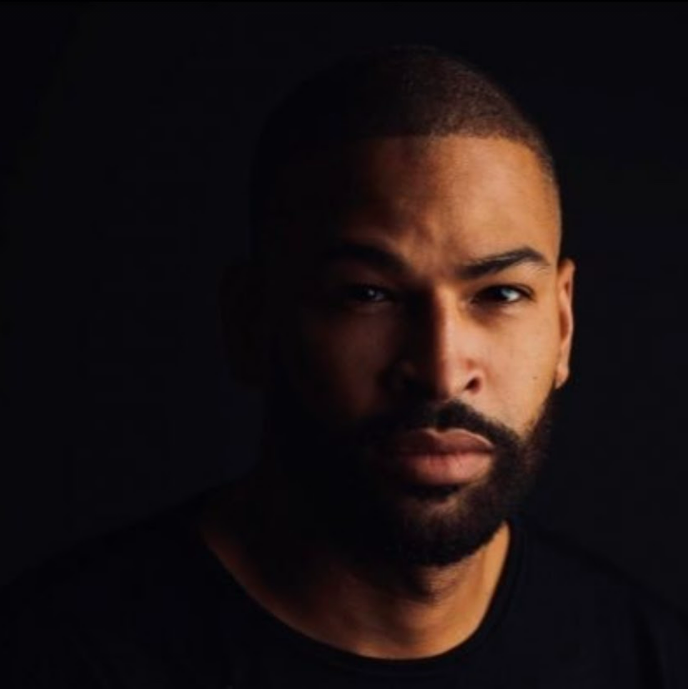 The new private investment fund has secured a lead investment from Andreessen Horowitz (a16z), a venture capital firm that backs entrepreneurs building the future through technology.

In the middle of what must be a busy week for any NFT project, “Wallace” who heads marketing for top 20 NFT project Cyberkongz, and by extension, the venerable Kong Council, took the time to speak with us concerning their formula for success and how they built the strong community that supports them. 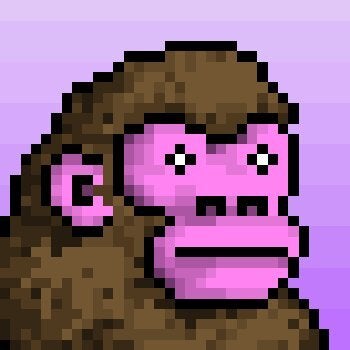 What was the start of Cyberkongz?

“We launched back in March… They were created by the artist and mad scientist NFT creator, Myoo. And he put together 989 Genesis Cyberkongz and 10 Legendary Cyberkongz before the whole profile picture boom. That was partially inspired by the CryptoPunks.

There wasn’t a lot out at that point. I think that was one of the reasons why we had such a big uptake and hope we were able to form such a close-knit community as well that there was a lack of noise in the industry at that time,” Wallace said.

What makes people enthusiastic about Cyberkongz?

“I think it’s been the constant innovation, and the quality of our team, the Council of Kongz, which have been put together by people within the community…

…it’s not just a roadmap that we put up… It’s the stuff that we’ve already completed that proves our track record. I think that’s what’s led to the Cyberkongz going from quite underground to sort of blowing up over last month,” Wallace said. 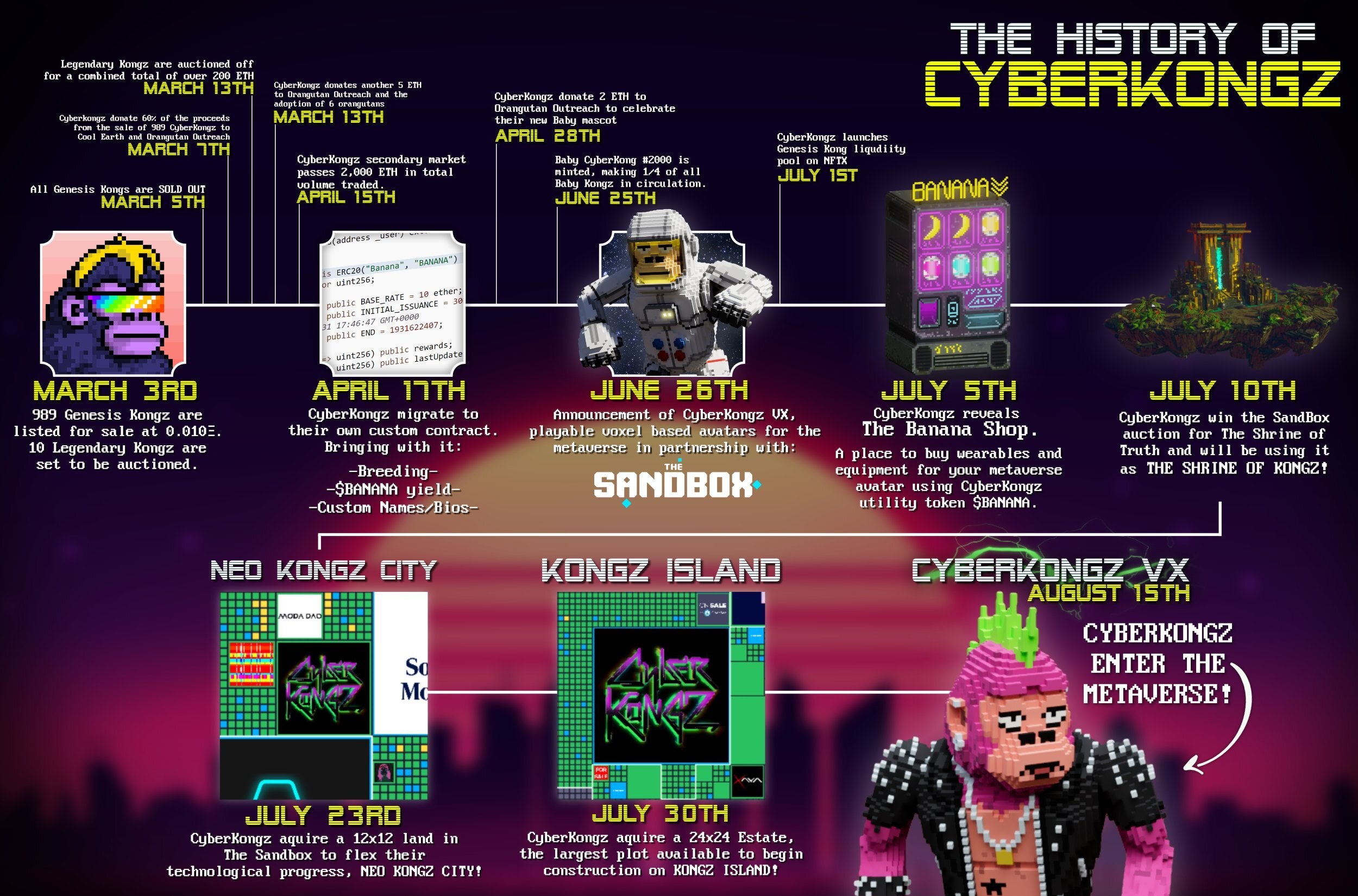 What is the nature of your connection with your audience?

“The key concept “Adding value” has driven our connection with our audience. Our core team is always helping with support tickets, even if they are all busy! They always find time to reply and you can answer most questions.

We feel that Cyberkongz is like one big family, the Jungle, with all Kongz holders included. Whether that is a new channel, new competition, organizing a new meetup, adding new file formats for our 3d models, or just a little heart-to-heart chat with another Kong when they are down.

We think that consistently pushing the boundaries of what we can offer fosters that connection, this has helped grow our community and continues to do so,” Wallace said.

What are you adding to the NFT world that was not there before?

“We consistently help push what the NFT space expects from a project, from the release of our utility token for breeding and name changing to partnering with The Sandbox and delivering the best looking voxel-based avatars compatible with the Sandbox instantly using their software, Voxedit,” Wallace said.

The Cyberkongz VX 3-D models are popular NFTs, but where can people use and interact with these avatars?

“…We’ve been working in partnership with The Sandbox to ensure that all of our actions and abilities for these avatars are all usable within the game. But we’re also open to and helping create in different formats offer the same avatar for the other games and stuff that are open with them online metaverses that are opening as well. And that’s something we’ll continue to develop as well, in the future just building them out for whatever is popular and whoever wants to partner with us. Beyond The Sandbox environment, beyond just creating avatars, we’ve also created distinct areas within the Sandbox map.
We’ve purchased three plots of land (in The Sandbox), we’re going to have a sort of Neo Konz City, which is a sort of futuristic cityscape, for our community and our avatars to use. You don’t have to own a Cyberkongz to travel freely and visit Konz Island, which is going to be the ancestral home of Cyberkongz, and we are developing the lore around that… We went to an auction and managed to get the Shrine of Truth… as a sort of spiritual home of Konz, and as a sort of social hub. So within that, we’re trying to push the boundaries of what we can do within the sandbox.

So our avatars are actually going to be a fair bit larger than other avatars. And our world is going to be a bit larger as well (with) gameplay aspects as well to see where we can increase the playability and give as much value as we can to the community…” 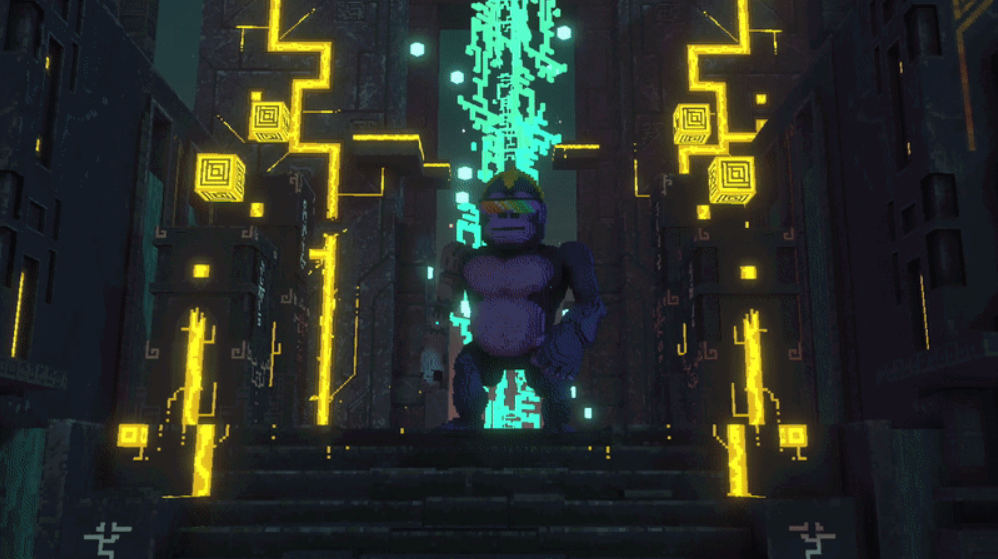 What have you promised to deliver? What is your audience expecting? What are you projecting around the VR kong cities and associated games?

“Our next step is to build our sandbox land into interesting and exciting gamified areas that our Kongz can use as not only social hubs but also to play minigames to keep them entertained. We’ve partnered with a company that is building worlds for users and brands in The Sandbox Metaverse. They are helping to bring our visions to life, creating buildings and assets that will give our Kongz places to hang out and play,” Wallace said.

What is your roadmap for the games meant to be part of Cyberkongz experience?

“Well, at the present, we’re building those… So this is all going to be within The Sandbox ecosystem, within the metaverse and we’re using our alliance in which, based on our understanding of how the lands will be set up, that sort of standalone areas with different portals in the sandbox via these portals. So, we are currently working with a few different companies at the moment that are building our landscapes for the one that we’ve purchased. And within those lands, you can use various different game logic and programmable elements to create games, like treasure hunts and boss fights. I think we’ve got a sort of Coliseum in the battle arena as well,” Wallace said.

What are you going to do for immediate utility for your $BANANA tokens given the SEC movement/OpenSea’s policy on NFTs as commodities?

“Our token has always been a utility token created to facilitate our breeding program, naming. and adding bios.

Also, recently we introduced the first iteration of our governance system in which $BANANA has an equal amount of votes as any other collection, as far as voting weight. CyberKongz has always been a community project, it’s how it was created, it’s how $BANANA and babies were integrated, and how it will continue.  We’ve already had 3 separate votes in which holders decided different minor and major decisions such as “Kongz Tank”, our first incubator for projects which utilize $BANANA and Kongz. In the end, CyberKongz will be a fully autonomous ecosystem ruled by its holders.

We’ve also got the big $BANANA shop launching soon, which is going to be tied in with The Sandbox. So that would be the ability to buy weapons, gear, and stuff for your avatar. You’re not taking away from the current attributes that it’s got, but giving additional elements. Everything from the funny and ridiculous to really devastating weapons that can be used for gameplay,” Wallace said. 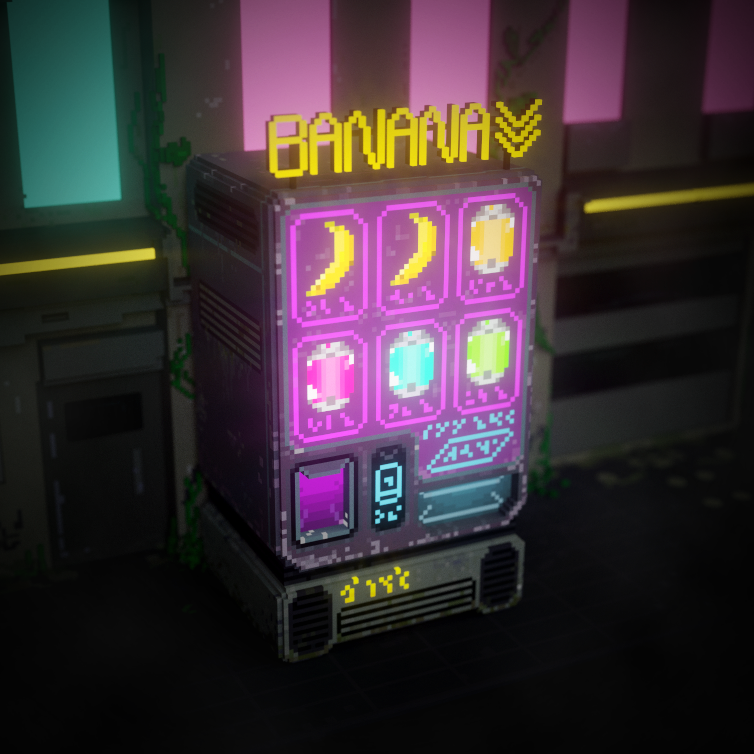 How do you view the current slowdown in NFT sales?

“I think the entire NFT industry is in a bit of a slowdown. It tends to happen whenever they’re Bitcoin or Ethereum start coming so with the strong run that we’re kind of starting to see a cycle where it’s the stable coins start to dip and people move their money into altcoins and then from altcoins when they start to see a drop here they split the cycle back toward NFTs.
So, we’re in a bit of a bear market but we’ve got a strong experienced community so… to be honest a there’s been a few sales within the Genesis Cyberkongz, but there’s a lot of people that are holding because they see the value… I think the strongest element of Cyberkongz as a community, the discord is phenomenal, and unlike any other that I’ve been in, we’ve got lots of celebrities and stuff that are starting to sort of feed in there.

But it’s not really been our strategy… it doesn’t matter how famous you are… No matter who you are, you’ll still be treated as one of the family. We try to maintain that sort of good vibe. And you don’t see anybody running down other projects and stuff. And if we do see that, then we’re trying to nip it in the bud, because it’s just not the way that we operate. Cyberkongz has been sort of the good guys of the NFT industry,” Wallace said.

How present are the founders on Discord?

“The founders are extremely active within Discord and very approachable… They are hanging out with the community often and helping in many different ways. They feel the community and like to chat with other Kongz in their free time… I think one of our greatest ambassadors is El Chapo (David Roberts, @DRMBrothers). He is a professional MMA fighter and recently even organized a private Art Exhibition for Kongz in Hollywood…

We also have some other well-known fans of Cyberkongz in ElioTrades, Alex Becker, Canadian DJ BLOND:ISH, and (actor/comedian) Andy Milonikas as well as collectors and artists such as 888 and Fvckrender,” Wallace said.

What NFT projects do you see out there that you love?

“One of them is The Sandbox of course. They are creating a whole metaverse where our avatars will live and we think they are innovative and welcoming a lot of new projects to join their MetaVerse,” Wallace said.

Where do you think NFTs are going? Is this a bubble?

“We don’t think it’s a bubble, we’ve noticed that bear markets tend to correlate with stable coin bull runs, so we think that there’s a lot of life left in NFTs and that we are indeed very very early,” Wallace said.

Many NFT projects come into the space with ambition, but follow-through is a more rare characteristic. Cyberkongz has been a bit of a “sleeper” before the start of October when it made the top 10 NFT project list — and since then its sales are slightly down.
What’s clear from talking to the people behind Cyberkongz is that their dedication to their audience is strong and they have been creating and innovating to deliver the experiences that people expect from top-tier NFT projects.

From my perspective, aspirations of making a game can be considered a red flag, but Cyberkongz is going about it the right way — utilizing an existing playground for interactions and partnering with third-party devs to build out game features that can serve as just a part of the Sandbox experience. That way the Kongz Council can stay focused on building its community and the utility of $BANANA tokens without taking the difficult and time-consuming side quest of becoming an indie game studio.

Whatever new developments happen in the NFT space, it’s a fair bet that the view will be interesting from Kongz Island.