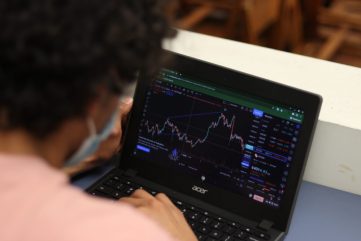 Cryptocurrency, the financial innovation that has captivated the attention of so many, has greater environmental repercussions than it may seem. This digital form of currency has grown rapidly in popularity as large companies begin to use it. As of today, Bitcoin, the original currency that was introduced in 2009, remains the most widely used among…

Cryptocurrency, the financial innovation that has captivated the attention of so many, has greater environmental repercussions than it may seem. This digital form of currency has grown rapidly in popularity as large companies begin to use it. As of today, Bitcoin, the original currency that was introduced in 2009, remains the most widely used among thousands of cryptocurrencies with Ether, a cryptocurrency introduced in 2013 by Ethereum, following in second place.

Whether it is a tweet from Elon Musk or Mark Cuban accepting Bitcoin payment for sports game tickets, Abou-Harb and Singh believe that these actions greatly aid the expansion of cryptocurrency in the near future.

“Some people believe that [cryptocurrency is] going to take off just because it’s unregulated, meaning that the government doesn’t have any control over it… it’s what’s called decentralized… If it were to shoot up to be double the value, there’s no one in the back regulating whether or not it were to crash or spike,” Abou-Harb said.

Many see cryptocurrency as advantageous for its functionality as both an investment and currency, as well as its decentralization. Unfortunately, these same qualities also make it an extremely risky investment because values fluctuate greatly and it is not widely accepted for payment, dependent on the users to sustain its value.

For these reasons, cryptocurrency lacks the efficiency of a physical monetary system and has no material worth.

“[When cryptocurrency was introduced], people were buying pizzas with Bitcoin and it was more seen as a currency … at this point, it’s more of an investment,” Singh said. “For every winner, there’s always going to be a loser… it’s very complicated; just Elon Musk tweeting about Dogecoin can make [its value soar], and him not talking about it for a week makes it go way down.”

Cryptocurrency transactions attract many participants who are interested in the value behind the technology known as blockchain. Blockchain is a type of distributed ledger technology which means that it keeps records of digital transactions by storing information in blocks, sections of about 500 transactions and a proof of work.

Within blockchain, “miners” solve complex math problems using specialized computers that guess and check possible solutions to the algorithm. By showing proof of work to complete these transactions with certain rules, one may earn digital coins, which can sell for high prices.

Because Bitcoin controls the amount of coins available to mine to increase their demand and value, miners face competition to solve these equations first, using loads of energy to power their computers.

“At the current moment, [you] have a lot of young people starting to invest… they want to see their account grow really fast without having to do much work,” Abou-Harb said. “Cryptos give the idea that you can make it big, like what you’ve seen in the past with other people in stocks, by doing very minimal work…  a large part of the market is from younger investors who are willing to throw money like crazy into very volatile investments, just for the chance of making it.”

All users of cryptocurrency have access to blockchain and the exchange, a global marketplace where they can exchange cryptocurrencies. Their transactions are recorded and secured, and their cryptocurrency may be stored through offline or online means, including a virtual wallet.

“People who are mining for crypto [are] using ridiculous amounts of electricity; it doesn’t even make sense. Most electricity is taken from … [burning] fossil fuels in the process,” Abou-Harb said.

In fact, according to the Canadian Association of Petroleum Producers, fossil fuels create close to 80% of energy used around the world. Any increase in energy consumption will consequently lead to an increased demand for and burning of nonrenewable energy that harms the planet.

According to several sources, Bitcoin alone holds responsibility for around 0.40% of global energy consumption. While this may seem like a small percentage, it has severe consequences, especially during a time where green energy objectives are crucial to reach. In addition to fossil fuel usage, threats of methane leaks work against countries’ aim to slow climate change.

Some claim that the majority of Bitcoin’s energy is sustainably sourced, however, the Nature Climate Change scientific journal found that Bitcoin contributes to global warming at a rate that Earth’s temperature would rise above 2℃ in fewer than thirty years. Bitcoin’s carbon footprint of 34.76 megatons of carbon dioxide is similar to that of Denmark or New Zealand, and its energy consumption is greater than that of many countries.

Bitcoin miners require so much electricity to obtain a single coin that they spend about 60-70% of their earnings on energy, often choosing to locate in rural areas to decrease fees. Singh and Abou-Harb predict that young investors of cryptocurrency are likely unaware of the financial and environmental toll of mining.

“I feel like a lot of investors just see the money, and they’re not really looking that deep into [the environmental effect] … I think the only way they will look deep into it [is] if it’s going to affect the cost or the money they’ll make off the cryptocurrency,” Singh said.

Large-scale mining through power plants also threatens to boost carbon emissions. In Seneca Lake, New York, Bitcoin miners have put the Greenidge Generation natural gas power plant back into use, adding new machinery and using water from the lake to cool it down.

As Bitcoin and other cryptocurrencies expand, the necessity for a solution to their excessive energy consumption and carbon emissions also grows. Fortunately, some miners already practice sustainable energy sourcing or have plans to implement new systems soon.

Many Icelandic miners rely on geothermal energy and many Canadians often take advantage of hydroelectricity to power their crypto mines. Some individuals have suggested placing a tax on mining to decrease motivation for the activity, and others believe that wasted energy from households can be effectively reused.

Ethereum, the technology behind the Ether cryptocurrency, is looking to reduce energy usage by switching from the proof of work method to the proof of stake method to confirm transactions. Proof of stake would allow people to obtain coins based on the number they stake, rather than the energy they put into solving the algorithm, decreasing the involvement of energy. The Crypto Climate Accord in April, consisting of three significant associations, strategized to completely eliminate cryptocurrency’s carbon footprint by the end of the decade through various sustainable methods.

In the end, people must debate whether or not this volatile investment is worth its cost to the planet.

“Most people likely aren’t aware of this. I think that is something that’s important to look into,” Abou-Harb said.