Everything we know about Super Bowl LVI so far – PR Week 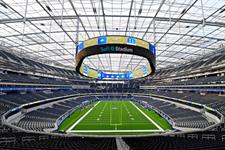 The Super Bowl is one of the biggest advertising events of the year as brands flock to NBCUniversal to grab a slot.

This year is no different. In fact, inventory was nearly sold out by July, despite NBCUniversal asking for a record $6.5 million for 30-second ad slots, up from $5.6 million last year.

But surges of COVID-19 Omicron variant have once again shadowed sports with uncertainty. Several leagues, including the NFL, have postponed games due to positive cases.

Still, advertisers remain firm. So, who will play and who will sit on the bench?

Singapore-based cryptocurrency exchange Crypto.com will run its first Super Bowl ad as cryptocurrency and sports continue to grow its relationship. In December, the exchange platform paid a reported $700 million for naming rights on the Staples Center Arena in Los Angeles, changing the name to Crypto.com Arena. It also became a sponsor for the 2021 Coppa Italia Final in 2021.

FTX is also getting in on the action. Cryptocurrency platform FTX will run its first Super Bowl ad in February. It has not yet released creative details, but the exchange has recently scaled its bid to enter the sports world, purchasing naming rights to an arena in Miami for $135 million. In September, the exchange ran an ad starring Tom Brady as ambassador. It has named Gisele Bündchen, Stephen Curry and Shohei Ohtani brand ambassadors as well.

E-commerce company Rakuten will make its Super Bowl debut with a 30-second spot during Super Bowl LVI. The ad was created by its in-house marketing team.

Automotive company Nissan is making a comeback this year, with its first Big Game ad in seven years.

The National Football League will advertise again this year with a spot airing during its own Super Bowl LVI.

After a one year hiatus, Meta (Facebook) will return to the Super Bowl under its new brand name. It is unclear whether the ad will be for the parent company or one of its social media platforms.

Intuit’s TurboTax will make an appearance at the Super Bowl for the ninth year in a row in preparation for Tax Day on April 15. The tax software brand will work with creative agency Wieden+Kennedy Portland on a spot.

At last year’s Super Bowl, TurboTax ran an ad titled “Spreading Tax Expertise Across the Land,” promoting the software’s knowledgeable experts to support DIY taxes. In 2020, the brand reminded viewers that taxes are something everyone has in common in its ad, “All People Are Tax People.”

In 2020, Intuit and the NFL agreed to partner with TurboTax becoming the NFL’s official sponsor for financial, accounting and tax software with the deal extending through the 2021-2022 NFL season. This year, TurboTax Live is also the presenting sponsor of the AFC and NFC divisional playoffs, as well as the AFC and NFC conference championship games in the NFL postseason.

Squarespace is back with another appearance in the Big Game. Last year, the website builder teamed up with Dolly Parton to create a remix of her 1980 hit “9 to 5.” The new song, titled “5 to 9,” paid tribute to entrepreneurs hustling after work hours to make their dreams come true.

This year’s ad details are still under wraps.

Toyota is back for the fifth consecutive year, working with agency partner Saatchi & Saatchi on an ad for this year’s game. While creative details are still unknown, last year, the automotive brand generated buzz when it shifted its 60-second spot away from cars and paid focus to the life of Paralympian and Team Toyota athlete Jessica Long.

DraftKings will return to the Super Bowl with an ad created by creative agency VaynerMedia. Details of the creative have not been disclosed, but the sports betting platform will run the 30-second spot in the first quarter.

WeatherTech’s appearance during Super Bowl LVI will be the ninth time it participates.

Automotive company Vroom is returning to the Super Bowl for the second time with an ad created by agency of record Anomaly. Vroom made its debut last year with a 30-second ad titled “Dealership pain” which showed a man being tortured by a car salesman before the scene changes to his house, where he receives the car he ordered on Vroom.

After a one-year hiatus, Avocados From Mexico will return for Super Bowl LVI. Last year was the first time in six years the brand had chosen to sit out the Big Game. Details of the creative remain a mystery.

Anheuser-Busch will advertise during the Super Bowl but has not disclosed which brands will be included, according to Marketing Dive. Last year, the longtime Super Bowl sponsor bought four minutes of ad time for Bud Light, Bud Light Seltzer Lemonade, Michelob Ultra and Michelob Ultra Organic Seltzer, but chose not to advertise for Budweiser for the first time since 1983.

Instead, Budweiser donated the funds it would have spent on an ad to coronavirus vaccination efforts.

Hyundai will sit out the Big Game for the second year in a row. The automotive company’s last Super Bowl appearance took place in 2020, when it ran a 60-second ad for the 2020 Sonata featuring actors Chris Evans, John Krasinki and Rachel Dratch.

“This was a decision based on business priorities and where we felt it was best to allocate our marketing resources,” a Hyundai spokesperson said in a statement to Adweek. “Hyundai has a long and successful history in producing memorable Super Bowl advertising and has found it valuable in building the brand and bringing attention to our latest vehicles and technologies. We will continue to evaluate participation in Super Bowl advertising on a year-to-year basis.”

Procter & Gamble’s Tide will sit on the bench for the Big Game this year, but will instead “focus storytelling efforts on other media and events through the winter,” according to Marketing Dive. Tide has advertised during the Super Bowl consistently for four out of the last five games.

This story first appeared on campaignlive.com.

Have you registered with us yet?