As the use of cryptocurrency grows around the world, an increasing number of celebrities and athletes are getting paid in digital assets like Bitcoin. Notably, on January 14, UFC heavyweight champion Francis Ngannou announced on Twitter that he is considering collecting 50 percent of his next fight purse in Bitcoin. 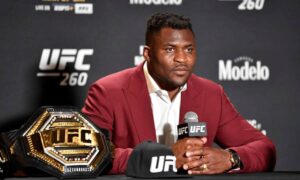 The Cameroonian, who is due to fight again on January 22, said: “I’ve been discussing crypto with my family and friends. Bitcoin is extremely popular in Africa, and I’m considering investing half of my fight purse in it. Bitcoin is the way of the future, and I believe in it.”

Been talking with my family and friends in the crypto space. #Bitcoin is huge in Africa and I’m thinking of taking half my fight purse in it. Bitcoin is the future and I’m a believer 🤔 @ufc #ufc270

Ngannou is embroiled in a contract dispute

It’s worth noting that the fighter was recently in contract talks with the UFC, however, they were at odds over a new UFC deal that included boxing options. It’s unclear whether Ngannou’s interest in Bitcoin as payment for his fight purse has anything to do with his statement that he “would not fight for $500,000, $600,000 anymore.”

“Bitcoin is massive in Africa,” the champion said, which isn’t an exaggeration; according to Chainalysis, the African cryptocurrency market rose by over 1,200 percent in value between July 2020 and June 2021. According to the corporation, African countries received $105.6 billion in cryptocurrency.

The Ultimate Fighting Championship, under which Ngannou competes, is a well-known international mixed martial arts organization. Crypto.com, one of the world’s major crypto trading platforms by trading volumes, announced a sponsorship and a fight-kit agreement with the company in July 2021.

The transaction is thought to be valued at over $175 million over ten years, according to sources familiar with the situation. Interestingly, this isn’t the platform’s first move into sports. It was previously reported that the Singapore-based cryptocurrency corporation had agreed to rename the Staples Center, home of the Los Angeles Lakers, to the ‘Crypto.com Arena,’ for an estimated $700 million.

Cryptocurrency exchange Crypto.com has reached an agreement with UFC, which is owned by Endeavor, to add another sports company to its sponsorship portfolio. The agreement’s terms have not been made public, but it is worth $175 million over ten years, according to sources familiar with the matter.

If you find this article informative then do share it with your friends and family!

Also read: In London, there are 40,000 cryptocurrency adverts, which is a new high