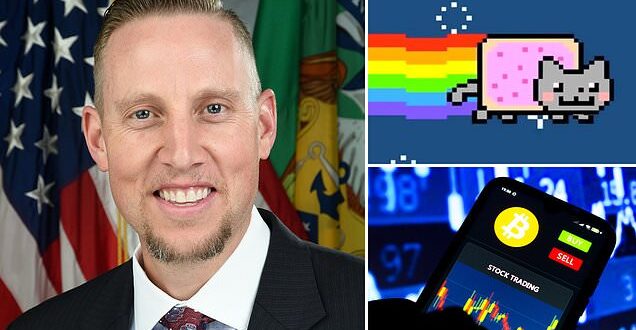 The IRS has warned that the cryptocurrency space and related non-fungible tokens are ripe for financial crime, alerting potential traders to exercise caution and be aware of the tax implications.

Ryan Korner, special agent in charge of the Los Angeles field office at the IRS criminal investigation division, delivered the warning during an event hosted by the USC Gould School of Law on Tuesday.

‘We’re just seeing mountains and mountains of fraud in this area,’ Korner said, according to Bloomberg.

Korner said that digital assets were a growing area of concern for regulators and tax collectors, and that the space was rife with money laundering, market manipulation and tax evasion.

Non-fungible tokens, or NFTs, are a trendy new technology that involves a unique digital token encrypted with an artist’s signature, which verifies its ownership and authenticity.

One NFT artwork, a massive collage by Beeple, fetched a record $69.3 million at a Christie’s sale in March

Banksy style NFT owned by Pest Control is seen above

From cartoon apes to video clips, sales of NFTs reached some $25 billion in 2021 as the speculative crypto asset exploded in popularity, data from market tracker DappRadar shows.

One NFT artwork, a massive collage by Beeple, fetched a record $69.3 million at a Christie’s sale in March.

Other NFTs include Twitter CEO Jack Dorsey’s first tweet, which fetched $2.9 million, as well as the classic viral video ‘Charlie bit my finger’ which brought in $761,000.

Picasso’s granddaughter and her son are looking to cash in on the craze by selling more than 1,000 digital images of a previously unseen ceramic piece from the artist.

In France, a surgeon faces disciplinary action after offering an X-ray image of a bullet embedded in a victim of the 2015 ISIS attack on the Bataclan as an NFT.

Prior high-profile digital assets to go up for sale as NFTs include Twitter CEO Jack Dorsey’s first tweet, which fetched $2.9 million, as well as the classic viral video ‘Charlie bit my finger’ which brought in $761,000.

The space has attracted the interest of a number of celebrities, as has cryptocurrency, which has seen numerous celebrity endorsements of new tokens or services.

Korner warned on Tuesday that celebrities would not be immune from investigation and prosecution if they became involved in financial crimes, though.

‘We’re not necessarily out there looking for celebrities, but when they make a blatant or open comment that says ‘Hey, IRS, you should probably come look at me,’ that’s what we do,’ he said.

Last year, boxer Floyd Mayweather and music promoter DJ Khaled settled SEC charges alleging that they failed to disclose that they had been paid to promote a crypto scheme through social media.

Korner said that the IRS is now working to train all of its agents on the nuances of NFTs and cryptocurrency because ‘this space is the future.’

Although many digital assets and services related to crypto are legitimate, the novelty of the space has attracted some criminal activity, and some crooks view it as an opportunity to hide assets from authorities.

A new report from blockchain analysis firm Chainalysis on Wednesday estimated that cybercriminals laundered $8.6 billion in cryptocurrencies last year, up 30 percent from 2020.

Overall, cybercriminals have laundered more than $33 billion worth of crypto since 2017, Chainalysis estimated, with most of the total over time moving to centralized exchanges.

The firm said the sharp rise in money laundering activity in 2021 was not surprising, given the significant growth of both legitimate and illegal crypto activity last year.

Money laundering refers to that process of disguising the origin of illegally obtained money by transferring it to legitimate businesses.

About 17 percent of the $8.6 billion laundered went to decentralized finance applications, Chainalysis said, referring to the sector which facilitates crypto-denominated financial transactions outside of traditional banks. That was up from 2 percent in 2020.

Mixers typically combine potentially identifiable or tainted cryptocurrency funds with others, so as to conceal the trail to the fund’s original source.

Wallet addresses associated with theft sent just under half of their stolen funds, or more than $750 million worth of crypto in total, to decentralized finance platforms, according to the Chainalysis report.

Chainalysis also clarified that the $8.6 billion laundered last year represents funds derived from crypto-native crime such as darknet market sales or ransomware attacks in which profits are in crypto instead of fiat currencies.

‘It’s more difficult to measure how much fiat currency derived from off-line crime – traditional drug trafficking, for example – is converted into cryptocurrency to be laundered,’ Chainalysis said in the report.

‘However, we know anecdotally this is happening.’

How to prepare for taxes if you traded cryptocurrency in 2021

Professionals have a major piece of advice for those who traded cryptocurrency for the first time last year: Take your tax prep seriously.

The IRS has been zooming in on cryptocurrency reporting with increasing interest in recent years. And the last thing you want is to lose money and time reconciling your tax liability, says Douglas Boneparth, a New York City-based certified financial planner.

So as tax season gets into full swing, here´s a quick guide to which cryptocurrency activity is reportable, how it´s generally taxed and the best ways to prepare.

WHAT YOU NEED TO REPORT TO THE IRS

The IRS treats virtual currencies as property, which means they´re taxed similarly to stocks. If all you did was purchase cryptocurrency with U.S. dollars, and those assets have been sitting untouched in an exchange or your cryptocurrency wallet, you shouldn´t need to worry about reporting to the IRS this year.

Reporting is required when certain events come into play, most commonly:

A critical distinction to make is that triggering a taxable event doesn´t necessarily mean you´ll owe taxes, says Andrew Gordon, an Illinois-based certified public accountant and tax attorney. Just because you have to report a transaction doesn´t mean you´ll end up owing the IRS for it.

HOW CRYPTOCURRENCY IS TAXED

Anytime you sell an asset for a profit, your resulting gain may be subject to capital gains taxation. To determine your exact gain or loss, you´ll need the date you acquired the cryptocurrency; the date you sold, exchanged or otherwise disposed of it; and the cost basis (the amount you paid plus transaction fees).

For example, say you purchased $2,000 worth of a cryptocurrency in January 2021 and sold it two months later for $5,000. That $3,000 capital gain would be subject to the short-term capital gains rate.

Once you´ve calculated your gains and losses on Form 8949, you´ll need to report them on Schedule D of Form 1040.

If you omit information on your taxes, there´s a risk of penalties, fees and, in severe cases, even tax evasion charges. And with the revision of Form 1040, which now features a direct yes-or-no question on whether you received, sold, exchanged or disposed of cryptocurrency, the IRS is signaling that those who fail to report won´t be able to feign ignorance, Gordon says.

2. GET YOUR RECORDS IN ORDER

Cryptocurrency exchanges won´t be required to send taxpayers 1099-B forms, also known as tax-reporting summaries, until the 2023 tax year. So the onus is on traders to keep accurate records of their transactions. Many exchanges, such as Coinbase, allow you to download your trading history, which might make it easier for you, tax software or a tax preparer to calculate gains and losses. If you made trades off-exchange, though, you might need to set aside some additional time for digging.

Reporting a single trade on one exchange likely won´t be difficult. But a “typical taxpayer has three to five wallets and exchanges,” according to Shehan Chandrasekera, CPA and head of tax strategy for CoinTracker . This makes it harder to reconcile cost basis across varying platforms. If you´re an active trader, it might make sense to invest in software that can help track your transactions.

If your tax situation is complex, consider working with a cryptocurrency-savvy tax professional. They can guide you through the various accounting strategies the IRS permits for reconciling your gains and losses, and help determine which one makes the most sense for you.

5. MAKE LOSSES WORK IN YOUR FAVOR

If you didn´t take advantage of tax-minimization strategies last year – such as tax-loss harvesting, gifting or donating – but you realized losses, you still have a chance to lower your tax bill. Just as with stocks, if you sold a currency at a lower value than what you paid for it, you may be able to deduct up to $3,000 of those losses on your taxes.