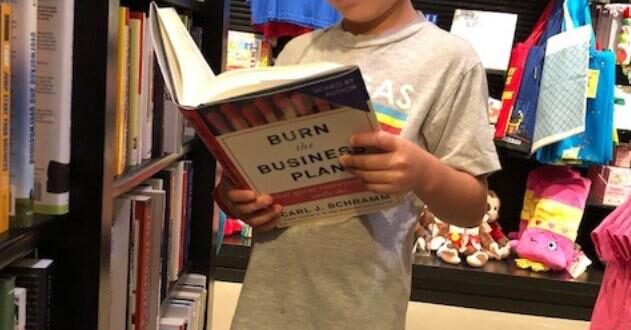 My youngest son Zev, now 11, has always been fascinated by money. When he was five, he asked me to explain taxes, interest, and insurance. At age eight, during a visit to a book store, he headed to the personal finance section and picked up a fun little number titled Burn the Business Plan. I captured the moment for financial posterity.

Zev keeps quarters on the kitchen counter and practices rolling them across his knuckle. Last month he asked me about pyramid schemes. I explained, offering examples of Charles Ponzi, Bernie Madoff, and the Albanian Civil War (prompted by the failure of various Albania-sized pyramids), hoping we’d move on to more productive topics like Modern Monetary Theory. His reaction: “I want to start a pyramid scheme at school.” My response: “Over my dead body.” After an extensive negotiation, we agreed he could try it with pencils. One day last week he returned home from school and glibly reported he’d gotten “a lot of pencils.”

With the explosion in new cryptocurrencies and non-fungible tokens (NFTs), pyramid schemes are in the news. Like a pyramid scheme, most new cryptocurrencies and NFTs have value only insofar as someone else is willing to buy them at a higher price. The greater fool theory explains why people are buying computer-generated images of bored apes or hand-drawn stick people, and why Donald Trump – a man who knows fools when he sees them – believes he can sell NFTs celebrating “iconic moment from [his] Administration such as the Fourth of July visit to Mount Rushmore and Christmas at the White House” (but not, apparently, clownshow attempts to overturn an election and instigate a coup – although the artistic possibilities may be richer than the man himself). In the case of the “POTUS NFT Collection” (creative direction by Melania Trump), pyramid scheme is a charitable description.

Judging by Super Bowl commercials, a lot of money is being spent convincing Americans to buy crypto. So many celebrities endorsed crypto (Lebron James, Larry David), there was even a counterprogrammed celebrity crypto ad (Jimmy Butler) warning viewers not to pay attention to celebrity crypto ads. Matt Damon made a widely ridiculed crypto ad in which he walks through a “Museum of Bravery” and intones melodramatically: “In these moments of truth these men and women — these mere mortals, just like you and me — as they peer over the edge, they calm their minds and steel their nerves with four simple words that have been whispered by the intrepid since the time of the Romans: Fortune favors the brave.”

According to surveys, something like 40% of American men ages 18-29 have bought crypto. That’s a fine statistic for millionaire actors and athletes. But as most young adults are peering over the (financial) edge, the crypto boom smacks of desperation reminiscent of pyramid scheme FOMO. Less Jason Bourne, more “a sucker born every minute.”

One reason for desperation may be something else 40% of young American men are doing: enrolling in college. Like crypto, there’s a lot of money chasing college. Governors in Arkansas, California, Colorado, Illinois, Kentucky, Louisiana, Maryland, Missouri, and Virginia have announced plans to increase higher education spending next year. California envisions a 5% bump, which means an additional $300M for both the UC and Cal State systems. Maryland is proposing a 17% increase.

But while far from a crypto get rich quick scheme — college is supposed to be get rich slow — for far too many, college has become get rich not at all. According to a new College Scorecard analysis from Georgetown’s Center on Education and the Workforce, 40% of those who enroll in college aren’t seeing any income premium a decade out. And at 30% of colleges, more than half of students earn less than high school graduates. Flashing red employment outcomes signal that the value of a typical college degree is increasingly cryptic.

Back when crypto was more closely associated with fascists than currency, a degree conveyed general capability across various dimensions: thinking, speaking, writing, getting along with people, stick-to-it-iveness, and an ability to learn. This “hail fellow well met” low-fidelity signal was sufficient for employers to invest in launching the careers of tens of millions of young Americans and allowed accredited colleges and universities to become the sole socially acceptable pathway to highly remunerative jobs (there’s always been crime and the construction trades, in that order) and dramatically increase wallet share. Adjusting for inflation (something I still need to explain to Zev), colleges charge 150% more than they did 50 years ago.

The rise of college stems from a combination of two distinct functions: skill-building and credentialing. But in these digital times, both functions are under attack. Colleges and universities now face thousands of online skill-building competitors. According to Credential Engine, the number of unique lower cost (in some cases free) skill-based credentials (550K) now exceeds degrees and certificates offered by colleges and universities. Meanwhile, signals need to be sharper. Employers are demanding specific platform and business skills that few colleges are interested in teaching.

Given the array of alternatives, credentialing must be the reason unsustainable enrollment declines haven’t progressed beyond community colleges and why credible observers continue to say “having a degree continues to be king.” The shift from macrocredential to microcredentials has been stymied by employers’ inability to decipher the meaning of thousands of skill-based credentials and integrate them into decision making at the top, middle, and bottom of the hiring funnel. Employers sort of know what college means and continue to try to apply it to increasingly inapplicable job descriptions. But they haven’t the faintest idea what all but a handful of these microcredentials mean.

None of this is new. Six years ago the Wall Street Journal recognized that digital credentials “don’t carry much weight in hiring yet… because managers don’t trust or recognize many of the companies and organizations behind the badges and courses.” What’s new is the value being attributed to digital credential platforms – our firm recently exited an investment in market leader Credly, acquired by Pearson for $200M – and that we may finally have a mechanism for solving this problem.

I remain a crypto skeptic. But a recent New York Times article opened my eyes to applications that go well beyond financial gymnastics. Kevin Roose’s profile of Helium, a network of long distance Internet hot spots, demonstrates how crypto can be used for good. Starting about eight years ago, Helium first tried to build its network alone. But the company nearly ran out of money and was forced to pivot to asking users to buy and connect their own hot spots. The reward: crypto tokens called $HNT that provide ownership in the network. The more a given hot spot is used, the more $HNT tokens it generates for its owner. Like any other cryptocurrency, tokens are bought and sold on the open market. The resulting decentralized incentive system “worked like a charm. Crypto fans raced to set up Helium hot spots and start generating crypto tokens. They traded tips on Reddit and YouTube for increasing the range of their hot spots, by attaching them to tall buildings or putting antennas on their roofs.” There are now 500,000 Helium hot spots around the world.

The missing link for skills is finding a way to systematically validate microcredentials; what do these new credentials really mean? Fortunately, millions of people are positioned to assess the validity of skills-based credentials: supervisors, teachers, mentors, and colleagues of individuals with the credentials in question. Or go one better and delve below the signifier to identify and validate skills in individuals; what specific skills does a candidate really have? Either way, this information is available. Who’s the best arbiter of your skills? The people you work with and have worked with; those who’ve seen you(r) work. As research has consistently demonstrated that the best indicator of whether a candidate can do a job is relevant work and work product, what’s missing is an incentive for supervisors, teachers, mentors, co-workers, and hiring managers to identify, validate, and act on this information.

It’s not hard to imagine a future “Skillscoin” answering the bell. The mechanics of how a Skillscoin would be issued (for what actions, in what amount) – “tokenomics” in crypto-ese – would be worked out by the community. Token rules would also need to ensure accountability: incentivize good skillspotting and disincentivize skillsquatting and skillspoiling (eagerly awaiting tokens for coining these terms). Allowing community members to receive Skillscoin for adding value to a talent network – finding, verifying, making decisions based on skills, or demonstrably gaining additional skills – could establish the requisite decentralized incentive system.

Turns out the future is nearly here. It’s not called Skillscoin, but rather BTRST (Braintrust). On the surface, Braintrust is just another gig marketplace matching tech talent to jobs. Yawn, right? But it’s the first to apply crypto to skills. Six months ago the BTRST token launched on the Ethereum blockchain. 54% of 250M BTRST tokens were reserved for rewarding value-creating behaviors like screening talent, connecting talent to jobs, successfully completing jobs, and taking courses to build skills. Both talent and employers can stake tokens to stand out and prove they’re serious (if you flake, you lose your BTRST).

While Braintrust’s token economy doesn’t yet reward community members for identifying, validating, and acting on specific skills, as incentives are governed by token holders, I’d bet some BTRST on new rules. And through its crypto-powered decentralized incentive system, Braintrust is able to charge less than other gig marketplaces: talent pays nothing, employers are charged 10% of contract value.

We believe that talent networks… will eventually be replaced by systems that embrace… network transparency, aligned incentives, and decentralized governance mechanisms. This new model is enabled by the emergence of Web 3.0 network technologies, including tokenization that provides the currency for decentralized commerce.

If its credentialing function could be separated from the skill-building function, college is a talent network not unlike Upwork, Fiverr, or Braintrust. But while Upwork and Fiverr extract 20% of payments to talent (vs. zero for Braintrust), college’s take rate – accounting for direct cost of tuition, fees, and opportunity cost – is higher for most students, and even more extractive for the critical period of career launch.

So if enrollment in extractive colleges is hanging on the credentialing function, new rules for BTRST or a future Skillscoin (or perhaps $killscoin – more crypto) could effect the shift to microcredentials and topple the macrocredential. By creating a decentralized incentive system for skills, crypto could expose college’s credentialing pyramid and force it to compete on a level playing field with other, much less expensive skill-building options and pathways. And if that happens, students will find the value proposition of many less selective schools seriously lacking in terms of cost/risk and outcomes. Crypto could also pull back the curtain to reveal that outcomes at selective schools are largely (and tautalogically) a result of selectivity.

With the emergence of crypto-powered talent networks, college may need to burn its business plan: its currency is on the precipice of devaluation.

Thanks to Jomayra Herrera of Reach Capital for her suggestions for this piece.

Camila Russo Wrote A Book On Ethereum’s Origin. Will Her Next Publication Feature Big Eyes Coin And Dogecoin? – Analytics Insight

Camila Russo Wrote A Book On Ethereum’s Origin. Will Her Next Publication Feature Big Eyes Coin And Dogecoin? A renowned journalist in the crypto sphere, Camila Russo is frequently seen commenting on industry trends, the crypto market’s history and its future. Her book ‘The Infinite Machine’, an origin story about the Ethereum Network (ETH), is […]

Best Cryptocurrencies To Invest In Before 2022 Ends: Dogecoin, Big Eyes Coin And Bitcoin There’s no denying the fact that 2022 was not a good year for cryptocurrencies. With two crashes, one in May and the other in October, there was a sense of panic in the market. However, that is changing now. There’s an […]