When I was a kid, I always glanced at the tabloids on the rack at the grocery store’s checkout counter. The headlines often referenced celebrities and UFOs (not necessarily in different stories). Another common topic of those periodicals’ articles was the future — as predicted by quasi-famous psychics. From what I remember, very few of their predictions actually came true. But the headlines were always fun to read.

My thoughts harkened back to those days recently when I came across a prediction about the price of Ethereum (ETH -4.17%). Unidentified “crypto experts” project that Ether tokens will be sold for at least $48,357.62 (you’ve got to admire the level of precision — down to the penny) by the end of the decade.

To put that prediction into context, Ether tokens currently change hands for less than $1,900. But could Ethereum really soar 26x by 2030? 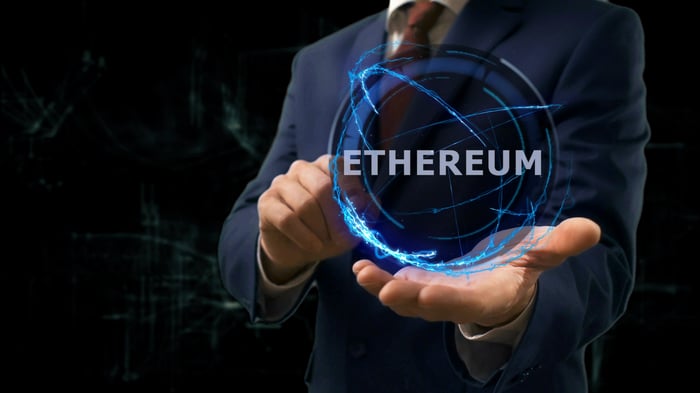 You might look at Ethereum’s recent performance and conclude there’s no way the digital token could deliver a 26x return within the next eight years. However, it’s not an impossibility if history is any guide.

When Ethereum launched back in July 2015, its ability to support smart contracts was a game-changer for the crypto world. Although the token’s price plunged early on, it didn’t take too long for Ether to take off. By May 2017, Ethereum was up more than 26x.

There was plenty of volatility in the subsequent years. Investors were taken on a roller-coaster ride as Ether’s price soared, then sank, only to soar again — and sink again. But the cryptocurrency market went on a tear in 2021, and Ethereum once again hit its stride. 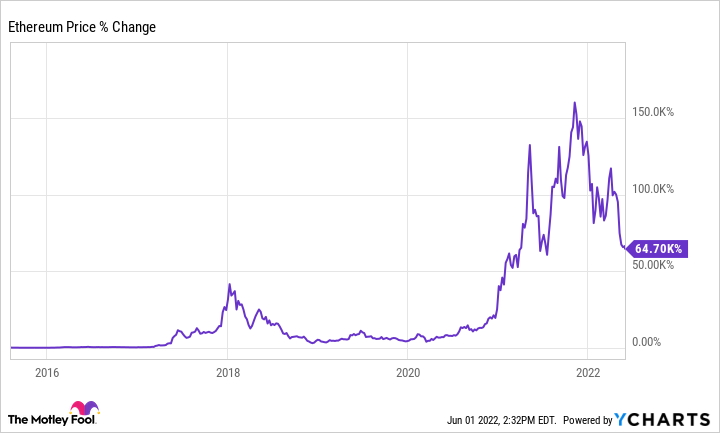 By mid-April 2021, Ether had skyrocketed another 26x from its May 2017 level. It has since given back a large chunk of those gains. However, Ethereum has clearly demonstrated that it can deliver 26x returns.

Could Ethereum do it again? I think there’s at least one potential scenario where yet another 26x gain is possible.

This scenario starts with the upcoming Ethereum merge. The merging of the Beacon chain with the Ethereum mainnet will support staking and will improve the blockchain’s energy efficiency. It also paves the way for the introduction of shard chains (potentially in 2023). This phase of the Ethereum upgrade will lead to much lower transaction costs and significantly greater capacity.

Ethereum already ranks as the second-largest cryptocurrency in the world based on market cap, trailing only Bitcoin (BTC -3.30%). The upgrade could attract more developers to the Ethereum blockchain. That would inevitably serve as a big catalyst for Ether’s price.

It’s not too difficult to envision Ethereum becoming even more of a de facto standard for decentralized app (dApp) development than it is now. I could see it knocking Bitcoin off its perch as the top cryptocurrency. And if dApps fulfill their potential with Ethereum as the primary foundation, a third 26x climb could be in the cards.

Now for a reality check. While it’s possible that the prediction for Ethereum hitting $48,357.62 by 2030 will come true, I’ll be the first to acknowledge that the probability of it doing so is low.

To reach that level, the market cap of Ethereum would have to top $5.8 trillion. That’s more than the combined market caps of Apple, Microsoft, and Amazon today.

I do think that the Ethereum merge and subsequent upgrade phase bode well for the blockchain’s prospects. However, there are plenty of rivals that also offer compelling advantages.

Of course, I grew up reading predictions like the one that the U.S. Air Force will reveal that it has an alien spacecraft hidden in a desert facility. My hunch is that Ethereum has a better chance of delivering a 26x return by 2030 than the UFO prediction has of coming true.