I Would Love To Get Rich, But I Don’t Think Investing In Crypto Is The Way — Here’s 6 Reasons Why – Yahoo Sports 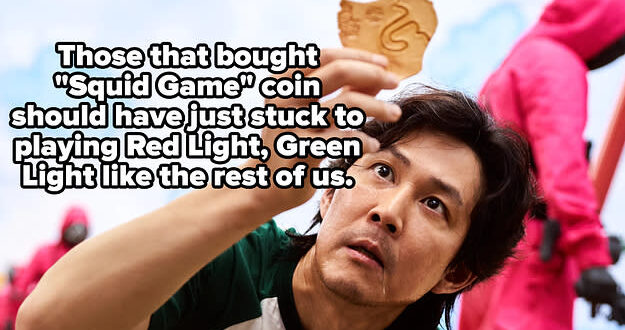 Favorite holiday? Halloween. Favorite type of movie? I have a Shudder subscription. Favorite author? Stephen King is in my professional bio. Needless to say, it’s spooky season in my life 24/7. So, when I first heard of cryptocurrency, I thought maybe the Crypt Keeper had finally decided to open a bank.

I may or may not have just dated myself as an elder millennial. Still, one thing I haven’t done is tell you what cryptocurrency is and why I’m hesitant to invest with my cold hard cash. I love all things money, but there are some things even I cringe about. Cryptocurrency is one of them.

“Cryptocurrency is a broad term for digital tokens that exist online only and are usually not issued by a centralized regulatory authority,” Joe Cortez, editor of the crypto and blockchain news outlet Gokhshtein Media told BuzzFeed.

Cryptocurrency (or crypto for short) is a virtual or digital currency backed by cryptography. Because of this, it’s difficult to counterfeit. Cryptocurrencies rely on blockchain technology to disperse funds to customers and make a deposit. Because of the disbursement across an extensive network of computers and servers, cryptocurrency is not regulated by the government or vital financial players like the FDIC.

So, how is crypto different than our regular currency?

Regular currency, primarily known as fiat money, is paper money made legal by the government. So all those benjamins floating around your checking account are worth something because the government says so.

Central banks, backed by the Federal Deposit Insurance Corporation (FDIC), issue fiat money. The FDIC insures that, as a customer, if you have $250,000 or less at their bank, your money is safe. So even if the bank you’re using suddenly closes its doors, you’ll still get your money back.

Unlike fiat money, the government has not issued any value to cryptocurrency, but private companies that rely on blockchain technology do. Getting into the crypto market is also more accessible now than ever. Consumers hope that the digital tokens they buy will eventually be worth more tomorrow than they are today.

It’s important to note that some people do like crypto for other non-investment uses. Some prefer to invest in what may be the next wave of technology. Some feel they can keep funds off the grid, which is definitely an alternative to sticking cash under your mattress. For communities that are wary of government involvement or even those that think there should be less of it, crypto is a great alternative.

If you think crypto is suitable for your portfolio, don’t spend more on it than you can afford to lose.

I’m all about getting rich. My dream is to literally wake up every day, sign checks from my home office, and then go back to bed. But I’m not sure crypto is the right way to do it. And that’s why I’m sharing six big reasons why I’m passing on investing in crypto:

President Biden issued an executive order in March of 2022 to call together different federal agencies to assess the different types of digital currency. He also asked agencies to consider what it would look like to create their own digital central bank. Creating a digital central bank would give consumers another option besides blockchain. Up until then, the government lacked an official approach to cryptocurrency.

I’m not surprised the government has taken this long to assess cryptocurrency regulation. It’s harder to care about the regulation of something you cannot assign value to in a traditional sense. Since the government only considers what regulation would look like, my money isn’t backed by conventional means like the FDIC mentioned above. I’d be big mad if I woke up one day and my bitcoin was gone without a trace.

When you value traditional investments, such as stocks, bonds, and real estate, you know what you’re looking for to see if it’s an excellent addition to your portfolio. Typically with stocks, you have historically accurate data of how well the company performs. With real estate, you can consider factors such as the neighborhood, school district, and the current housing market supply and demand.You don’t have that yet in cryptocurrency. There is no data backed by a history of market performance or anything tangible. Cortez admits, “Unlike fiat, which is usually backed by a central bank’s monetary policy, cryptocurrencies can fluctuate in price based on many different factors, including utility, purchase runs, or sell-offs.”As Carrie Bradshaw once said, “I prefer my money in my closet where I can see it.” I feel like I’m better off with shoes than invisible money coupons.

3. The first recession was toxic to me, like Regina George.

I’ve already mentioned being an AFAB millennial who lived through the Great Recession and what I’m doing to prepare for another one. Spoiler alert: It was rough.

Opportunities for growth that I was promised never materialized. My hours were cut, which made living paycheck to paycheck while going to school even harder. Once I did get my criminal justice degree, finding a career in my field of study was challenging. Many police departments and counties were on a spending freeze, making do with what employees they were able to keep. Even as I looked for another job, finding something that would put me on a path to earning more was hard. When jobs came back, they all started at lower pay, which did not keep up with inflation throughout the years, especially now.

Adding that I already earn statistically less as a Latina, I’ve had to catch up financially and quickly. I crave the stability that I didn’t have for years, and because of this, I prefer traditional investment methods and working with established financial institutions that have been around for decades.

4. I’m not trying to have Joanne The Scammer manage my portfolio.

My friend Joanne called from her Caucasian Living mansion and asked if I would be interested in investing in a new type of cryptocurrency, “Joanne.” I had to decline politely, but at the same time, I wondered how easy it could be to have a cryptocurrency scam pulled on me.

Joanne The Scammer / Via media.giphy.com

Crypto scams aren’t new. There is the famous “pig butchering scam” where you fall for a lover in a far-off land who’s down on their luck and asks if you can send them money via crypto because they don’t have access to a traditional checking account. You have scammers that hack into people’s Facebook to share an investment opportunity with their friends. It’s easier to get caught up than you think.

Think back to the release of the popular Netflix show Squid Game. While some of us were busy trying to make Red Light, Green Light popular again, others were buying Squid Game cryptocurrency.$SQUID was a coin released after the show’s premiere. Despite not having any direct ties to Netflix or the creators, people bought into it immediately. What buyers didn’t know was that $SQUID was a scam known in crypto circles as a rug pull. Once the funds had been drained and vanished, the website was immediately pulled. Those hoping to make a quick buck off the show’s popularity were left in the cold. They would have been better off playing Red Light, Green Light like the rest of us.

As inflation rose across the country, cryptocurrency evangelists started pulling their money from the crypto market and other investments deemed risky. As investors started liquidating their accounts, the price of crypto began to fall. The algorithmic stablecoin became worth less than the US dollar, which began a trickle-down effect.

While some economists have claimed the market will return to what it once was, I have difficulty swallowing it. Because crypto is so new, nothing has happened previously compared to the most recent crash. While I do think it will eventually come back, I don’t want to put money toward something that may or may not recover.

Due to my hot mess 20s, I’m more behind in saving for retirement than I’d like to be. While I want all the cats I’ll own to have their pick of Fancy Feast, I don’t want to be eating it too.

When you get serious about your retirement investing game, you know that when you invest, it’s for the long haul. As much as I want to be retired tomorrow, I know that it will take years for my investments to grow to a comfortable level. That’s one of the reasons I and others don’t worry about when a bear market happens, like the one going on now.Make sure you invest in your retirement before jumping into the next crypto craze. If you have a 401(k), ensure you get that employer match. If you’re looking into a Roth IRA, make a significant investment before you dump the rest into bitcoin. Make your future self proud, and make sure you take care of yourself first.

Are you investing in cryptocurrency? Did you make a significant amount of money, or did you lose? I want to hear from you!

Liverpool FC, one of the biggest global football clubs, and Sorare, a blockchain-based football gaming and non-fungible token platform, have recently announced the expansion of their partnership. Through the collaboration, Liverpool FC and Sorare will release new unique experiences for the football fans. The English football club initially developed a collaboration with the blockchain firm […]

2 Reasons This Tiny Crypto Has Explosive Potential – The Motley Fool

Blockchain technology delivers decentralization, transparency, immutability, and security to various industries, giving rise to many use cases in cryptocurrencies, including Moshnake (MSH). Cryptocurrency use cases can be classified into various forms ranging from the Capital Market to Finance, Decentralized Finance (DeFi), Energy and Sustainability, Real Estate, Sports, Media and Entertainment, and so on. Now, let’s […]