Ethereum: second biggest cryptocurrency to cut energy use by over 99%, but the industry still has a long way to go – Yahoo Eurosport UK 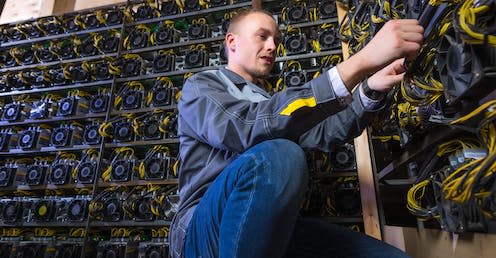 Cryptocurrencies use an eye-watering amount of energy. Ethereum, the world’s second-largest cryptocurrency, uses an estimated 78 terawatt hours of electricity each year, comparable to the power consumption of Chile.

Ethereum has announced plans to rid itself of the energy-intensive code that has long muddied crypto’s environmental image, and cut 99% of its energy use in the process.

Some cryptocurrency commentators suggest that the “merge”, as the makeover has been coined, represents one of the most important events in the history of crypto. Even those uninterested in pixelated cat pics and metaverse meetups, most of which depend on Ethereum, will find comfort knowing the carbon equivalent of Hong Kong’s annual emissions will be erased overnight.

The merge will result in Ethereum shifting its security mechanism away from what’s known as a proof-of-work method towards so-called proof of stake.

Cryptocurrencies are not governed by banks. For networks using the proof-of-work method, the job of validating transactions is performed by a global network of specialist machines, known as miners. These machines repeatedly guess a random code with the winner receiving transaction fees as well as some newly minted cryptocurrency.

Crypto mining works like an ever-expanding game of hungry hippos. The more players that join the mining competition, the harder it becomes for any single player to win anything. These machines consume vast amounts of energy. A single Ethereum transaction is responsible for the same amount of energy used by the average US household in a week.

The proof-of-stake process reduces the need for energy-intensive processing equipment to validate transactions. Cryptocurrency owners instead offer their own coins as a security deposit for the chance to become validators. Ethereum requires users to stake a minimum of 32 Ether tokens.

Rather than competing, validators are selected to mine. Do the job well, and the validator is rewarded with even more crypto. But if they validate fraudulent transactions or otherwise defy network rules, they lose their stake. This disincentive is called “slashing”.

Proof-of-stake networks are typically assembled around 20 machines, using a comparatively small amount of energy. While being more efficient, proof of stake also reduces network congestion while being cheaper for users.

Advocates for proof of work argue that proof of stake is an unproven alternative. Many fear that the merge might consolidate control of the network in the hands of wealthy investors while weakening its security.

However, several networks, including Cardano and TRON, already use a proof-of-stake method. To uphold security, crypto owners in these networks vote for the most qualified validators.

As it is written into the project’s “development roadmap”, Ethereum’s journey to proof of stake has always been likely. Ethereum’s developers have consistently repeated claims of an imminent shift. But progress has been slow, leading many to believe the merge might never happen.

Proof-of-work mining has up to now proved very profitable. However, the global energy crisis and crumbling crypto markets have made it far less lucrative than previously.

The energy crisis is also prompting regulators to act on energy-intensive industries. This is particularly true in Europe where the transition away from Russian energy dependence is biting hardest. While a proposal to ban proof-of-work mining failed to win EU approval earlier this year, an imminent crackdown looks inevitable.

Alternative versions, called “forks”, that ignore the software update are therefore highly likely. These forks will replicate the existing network, allowing subsets of the community to continue mining.

Many exchanges broadly support Ethereum’s proof-of-stake chain. Opensea, the largest marketplace for collectable crypto assets, says it will not list any other kind of Ethereum digital artwork.

However, the market is far from conclusive in its support. Large exchanges, such as FTX and Coinbase, have confirmed that they will allow users to trade forked Ethereum tokens.

While soaring energy bills could discourage the mining of an unpopular Ethereum fork, miners, in this case, may migrate towards more established proof-of-work networks. This would reduce Ethereum’s carbon footprint, but redistribute crypto’s carbon headache around the network.

What does this mean for Bitcoin?

Responsible for an estimated 70 million tonnes of CO₂ a year, Bitcoin remains the dirty elephant in the room.

Mining the number one cryptocurrency has become so competitive that the cost of entry can be up to US$1.8 (£1.55) million. Bitcoin mining is done by commercial mining companies that have to invest heavily in specialist hardware. Bitcoin miners, therefore, tend to be protective of their investments and resist changes to the status quo.

For cryptocurrency networks that cannot clean up their act, a global regulatory crackdown on proof-of-work mining is required. Miners are otherwise free to migrate to other chains, or operate from countries with weak environmental regulations, rather than adopt more sustainable practices.

During an energy crisis and climate emergency, Ethereum’s switch to a more efficient technology is good news. If it proves successful, regulators will probably see no reason why Bitcoin and other wasteful cryptocurrencies should not follow suit.

This article is republished from The Conversation under a Creative Commons license. Read the original article.

Peter Howson has received funding from The British Academy. He does not own any cryptocurrencies, NFTs, or any other digital assets.