Black Innovators Did Some of the Earliest Work in Cryptocurrency. What Happens Now That It’s Mainstream? – Morning Consult

In 2012, few people in Washington, D.C., were thinking about cryptocurrency.

Cleve Mesidor first heard about it around that time, while she was working for the Obama administration, but didn’t give much thought to it. A few years later, she was fully “down the rabbit hole” and has been at the forefront of the movement ever since, as cryptocurrency has grown from an outlandish idea to a sprawling — not to mention, profitable — ecosystem of digital assets.

And like other early Black cryptocurrency advocates, Mesidor has seen that crypto isn’t just popular among the types of people who usually dominate profitable financial products. More than 3 in 10 Black adults are likely to invest in cryptocurrency in general, according to Morning Consult data.

Respondents were asked how likely they would be to invest in each of the following:

Now, it seems like everyone in Washington is thinking about cryptocurrency.

As digital currency has gone mainstream, money has poured into K Street as new, powerful crypto firms jump into the unwieldy and complicated regulatory landscape. Financial inclusion is a big part of that discussion, and the people who did some of the earliest work spreading cryptocurrency’s message to the Black community are being increasingly pushed out of it, those early adopters say.

Is cryptocurrency helping to democratize finance and the economy, fulfilling the wishes of early advocates like Mesidor? Or is it a volatile asset that puts Black communities at particularly high risk?

Black creators and innovators in this space say they have been working on those questions for years.

Since taking the plunge into cryptocurrency, Mesidor now leads the National Policy Network of Women of Color in Blockchain, and serves as a public policy adviser to the Blockchain Association trade group. Before that, she worked as director of public affairs for the Commerce Department’s Economic Development Administration.

She cited statistics from Morning Consult, as well as other research, that shows cryptocurrency ownership among Black adults is higher than Black ownership of other financial assets.

“Innovators of color don’t get enough credit for being in this space from the beginning,” she said. “We dismiss the fact that people of color globally played a big role in creating this thing, and when you look at some of the findings that Black and Latinx adoption has exceeded expectations, it’s because of the work that innovators of color have been doing.”

Black adults are also more interested in participating in a variety of crypto-related activities compared to U.S. adults overall, and white adults especially.

Share of adults who said they would use the following cryptocurrency services:

For some of these early influencers, the appeal of cryptocurrency is steeped in history. Sinclair Skinner, co-founder of the website I Love Black People and the Black Blockchain Summit, noted the past connection of some traditional banks to the slave trade, as well as Civil Rights-era policy fights such as redlining and modern challenges that Black communities face in accessing banking services.

“People are dissatisfied with the status quo and are looking for something else,” he said. “This crypto thing seems to be the something else.”

The cryptocurrency landscape is drastically different than it was even just a few years ago. Large financial institutions that once looked on digital investment skeptically are now investing huge amounts of money to meet the demand for customers to own and trade cryptocurrency.

But it also comes with the likelihood of higher regulation — and not necessarily regulation that keeps Black investors front of mind.

“In some ways, it’s your worst fears come to fruition,” said Tani Chambers, who runs Black Women Who Invest. “For years, banks say that cryptocurrency is some kind of crazy talk; now they all have some kind of cryptocurrency department. Now they’re at the table, negotiating with regulators and figuring out what this should all look like.”

Without a seat at the table representing the interests of the Black crypto community, Chambers said that regulation could end up being restrictive, and inadvertently prevent Black people from making money in crypto rather than making sure that access is fair and investors are protected.

Still, with more interest also comes more risk and volatility, and with an asset so decentralized, scams and fraud can be a big concern. Black adults could be overexposed to these risks because of high adoption rates and interest, and that’s troubling to some regulators.

“To the extent there is fool’s gold in the crypto space, some of those who are going to be hurt most are going to be those least able to bear it,” acting Comptroller of the Currency Michael Hsu said in a September speech.

Another facet that’s come with cryptocurrency’s widespread acceptance: the proliferation of new voices into the conversation.

Early Black influencers say they’ve been trying to disseminate the right kind of information among the Black community, but as digital assets have become more popular, so too have new voices that have little to no knowledge of investing or cryptocurrency.

Influencers and celebrities, from Kim Kardashian West to Elon Musk, have started hawking cryptocurrency on their platforms, and the results don’t always lead to responsible and informed investing.

“I’ve seen people giving up their last bit of rent money and taking out their retirements based on Elon Musk’s comments and putting it into cryptocurrency,” said Najah Roberts, founder of Crypto Blockchain Plug, a cryptocurrency education center. “We’ve got to make sure that we’re really educating our communities.” 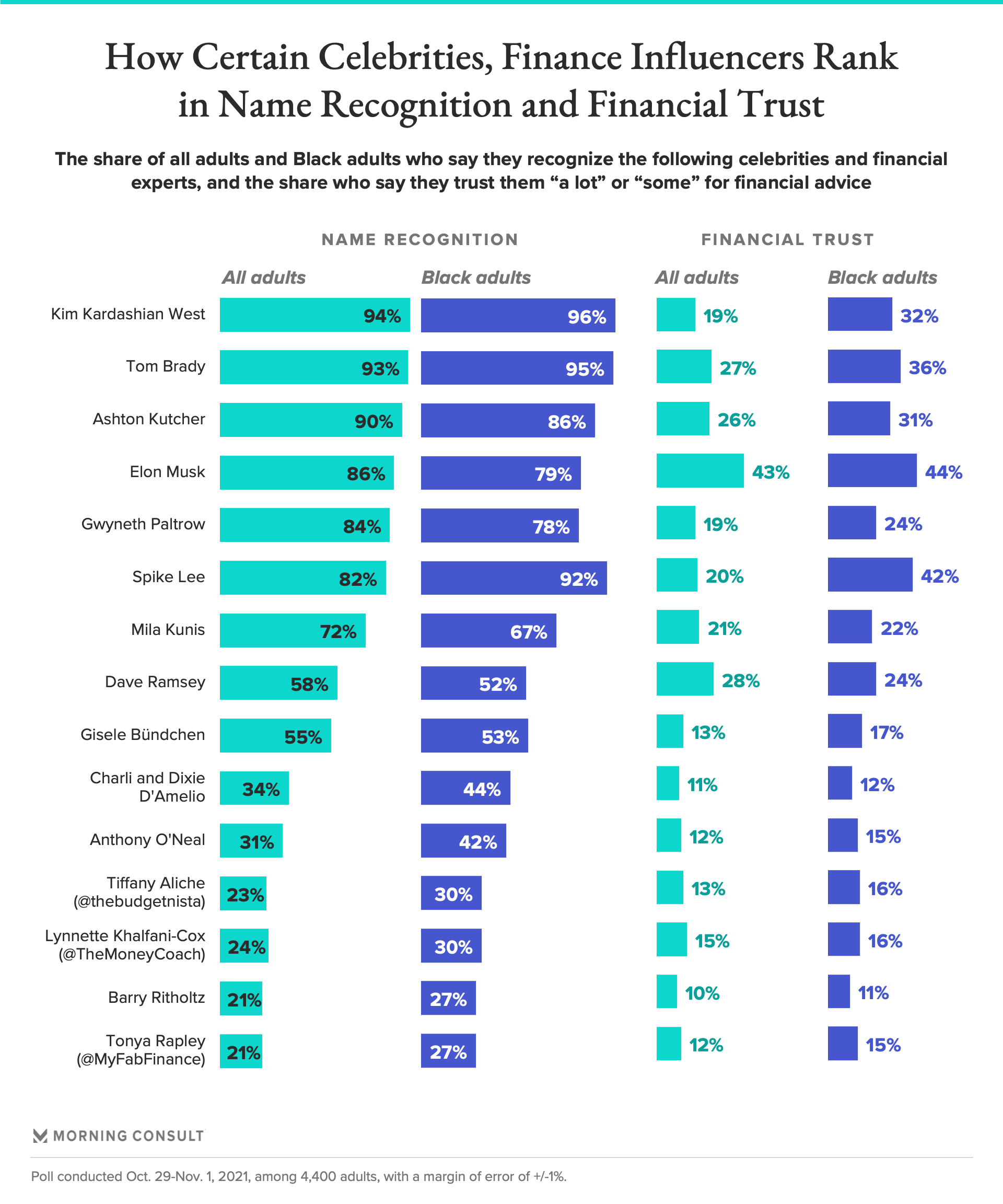 Among the list of celebrities and influencers who’ve talked about cryptocurrency, Kardashian West received the widest name recognition in the Morning Consult poll. Thirty-two percent of Black adults said they had “some” or “a lot” of trust in her financial advice, while 19 percent of all adults said the same.

Other recognizable names included on the list were actors, sports stars and Black personal finance experts on social media. Those in the last group, such as Tonya Rapley of @MyFabFinance and Tiffany Aliche of @TheBudgetnista, had relatively little sway among Black adults and the overall public.

Part of the issue, Roberts said, is an inclination to listen to successful people, regardless of expertise in finance, and the general prioritization of white, male voices over any others.

How to avoid bad influencer advice: directly educating Black investors in their communities

Central to the work of these early cryptocurrency advocates is what Mesidor calls “finding people where they’re at.”

While Black adults are more likely to say they’d invest in crypto based on an endorsement from a celebrity or an influencer, they’re also 9 percentage points more likely than adults overall to say they’d act on such a recommendation from a family member or friend, according to Morning Consult’s poll. 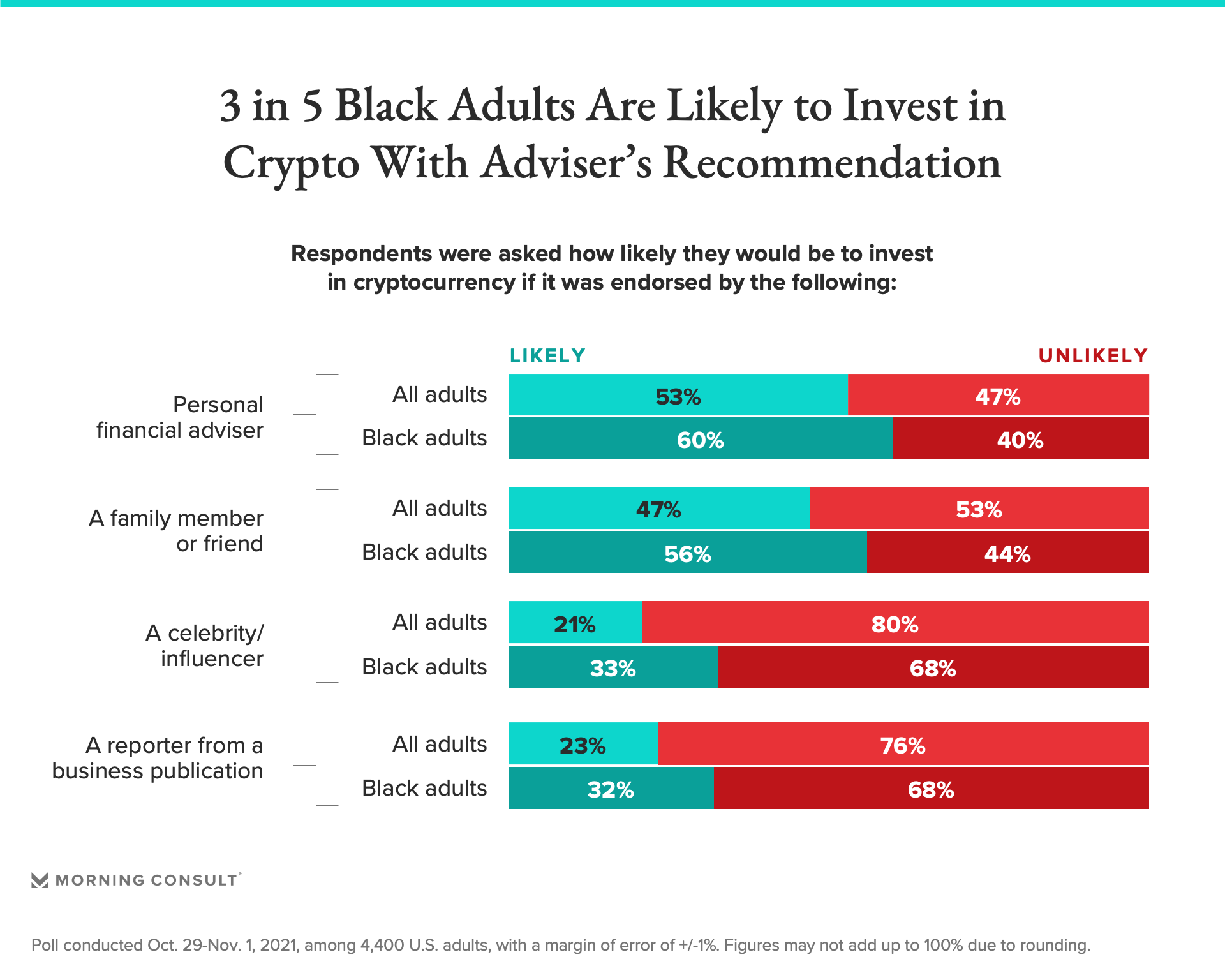 Going into Black businesses, financial institutions and churches and educating friends and family is going to be a far better solution to the vulnerability that comes with interest in cryptocurrency, rather than relying on government intervention, crypto advocates said.

That approach, they said, is the best way to ensure that interested members of the Black community aren’t left out of crypto investment opportunities.

“The history of this country makes us concerned about the little that we have, and we can’t afford to take much risk with it,” Mesidor said. “When we see there are fault lines and problems, we need to meet that need, not implement protectionism that says we’re going to ban and restrict.”